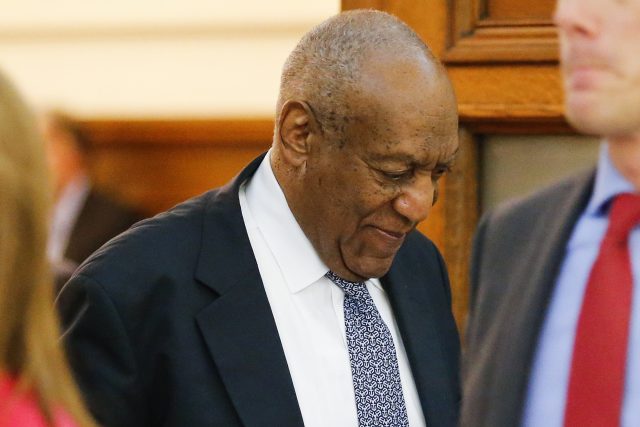 NORRISTOWN, Pa. (AP) — Bill Cosby acknowledged to police more than a decade ago that he fondled Andrea Constand after giving her what he said were cold-and-allergy pills to help her relax, according to a statement introduced Thursday at the comedian’s sexual-assault trial.

But Cosby also told police that Constand showed no ill effects from the 1 1/2 Benadryl tablets and never objected to his behavior. The TV star said they had been romantic before.

Cosby, 79, is charged with aggravated indecent assault and could spend the rest of his life in prison if convicted. He has said the sexual encounter at his suburban Philadelphia home in 2004 was consensual.

The January 2005 interview with police was conducted at his lawyer’s offices in New York about a year after the alleged assault.

Asked by police if he ever had sex with Constand, Cosby replied: “Never asleep or awake.”

“I never intended to have sexual intercourse, like naked bodies, with Andrea. We are fully clothed. We are petting. I enjoyed it. And then I stopped, and I went up to bed,” he said, according to the statement read to the jury.

Prosecutors decided against charging Cosby at the time, shutting down a police investigation after four weeks.

A sergeant testified Thursday that then-District Attorney Bruce Castor closed the probe hours after police met to review their next steps.

“We had been discussing investigative leads and where they were going,” Sgt. Richard Schaffer of the Cheltenham Police Department told the jury on Day 4 of the comedian’s trial.

Castor announced in 2005 that Cosby would not be charged because the evidence had shown both parties “could be held in less than a flattering light.” He said he was concerned that Constand had stayed in touch with Cosby and waited a year to call police.

A new set of prosecutors brought charges against Cosby a decade later, after a judge unsealed the comic’s testimony from a lawsuit brought against him by Constand. In his deposition, he talked about giving pills and alcohol to women he wanted to have sex with.

Constand, 44, of Toronto, directed the women’s basketball team at Cosby’s alma mater, Temple University, where he was a powerful trustee.

She testified this week that Cosby penetrated her with his fingers against her will after giving her pills that left her so limp that she was unable to push him away or tell him to stop. She denied they had a previous romantic relationship and said she had rebuffed his previous sexual advances.

On Thursday, a former neighbor, Purna Rodman Conare, testified that Constand became distant and withdrawn in the months after she said the entertainer drugged and violated her. Conare said Constand’s open, easygoing personality changed drastically in early 2004.

Cosby’s lawyers also seized on a pair of phone calls she made to him on Valentine’s Day, weeks after the alleged assault, as the defense continued its effort to show Constand maintained contact with Cosby afterward and was in a romantic relationship with him.

Constand previously testified she was simply returning Cosby’s messages about the women’s basketball program at Temple. She said she felt compelled to do so because of Cosby’s Temple connection.

Evidence presented Thursday showed that the team had a game on Feb. 14, 2004, and that Constand called the team’s coach between calls to Cosby.

Some 60 women have come forward to say Cosby sexually violated them, but the statute of limitations for prosecution had run out in nearly every case. Constand’s case is the only one in which Cosby has been charged.