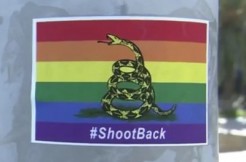 In West Hollywood, California, a new poster design combines two iconic flags, and coins a controversial hashtag. A snake sits coiled in the foreground, with a rainbow pattern in the background. On the bottom are the words: “#ShootBack.” It evokes both the Revolutionary-era “Don’t Treat on Me” flag, and the gay pride flag. Though that hashtag is new, it carries a significance critics find problematic. On Sunday, a man armed with a semi-automatic rifle killed 49 and wounded 53 people at a gay nightclub in Orlando, Florida. This attack, the deadliest mass shooting in U.S. history, has been attributed to his homophobia.

#ShootBack. The meaning seems pretty clear, though the fallout remains murky for now.

The Daily Wire reports the design started popping up on Wednesday morning, with posters and stickers all over the city. Authorities worry that the hashtag, though well intentioned, might incite violence.

As far as the law enforcement perspective, I believe we all understand the sentiment & people feeling the need to respond, but I’m worried by this kind of feeling or rhetoric being put out. I absolutely uphold and believe in the First Amendment rights of every person. However, we don’t need anyone starting violent reaction to an already tense situation. I would hope that the feelings of outrage can be tempered and poured into a positive and non-violent response.

In a talk with The Los Angeles Times, she said things have been tense in West Hollywood, which has a high LGBT population, since the shooting.

“We are disturbed by them,” she told the LA Times. “We don’t believe in an eye for an eye, and we advocate against gun violence.”

Don’t expect much institutional action in connection to this, though. Sergeant Lance Eddins told LawNewz.com the Sheriff’s Office hasn’t received any citizen complaints about it.

PJ Media reported that they spoke to the conservative street artist, “Sabo,” who claimed to speak on behalf of the group responsible. Sabo is the person who made that picture of Ted Cruz with a cigarette, and a tattooed, muscular body.

“It’s important that people know that this image came out of the gay community,” he said, according to the outlet.

As of Friday afternoon, #ShootBack hasn’t blown up on social media or anything, but it has gained some traction.

If I were to be shot at by a gay fellow, I’d want it to be @Nero, who else does so with this much style #ShootBack pic.twitter.com/Vatr4UE7Nf

liberals talk about empowering queers. But they will never consider empowering us to #shootback. #guncontrol pic.twitter.com/h16Jk3fsS5

#ShootBack like a boss. Get trained. Be armed. It is your right, regardless of sexual orientation. 🔫🌈

Safe to say it has gained support from some conservatives.

We at the City of West Hollywood are very disturbed and saddened by the message on these #shootback signs that have been plastered in the public right-of-way in many locations throughout West Hollywood. Our City advocates against gun violence and the proliferation of guns … Period.

The shooting massacre in Orlando, which took the lives of nearly 50 people, is tragic. There are no words that capture the heartbreak we have felt this week. It’s been an emotional rollercoaster for all of us. But we refuse to allow hate to win. We must not let tragedy pull us downward into a spiral that perpetrates violence over peace.

Monday night, we had a vigil for the Orlando victims at Micky’s in West Hollywood. There were more than 700 people. Yes, people were angry, people were frustrated, people were scared, and people were sad. But people did not call for violence. On the contrary — they called for our federal representatives to take action for stricter gun control. The message from the community Monday night was to love, not hate … to have pride, not fear.

What happened in Orlando demonstrates that we still have a long way to go to achieve full equality and acceptance of the LGBTQ community — in Orlando, and in every city and state in this country.