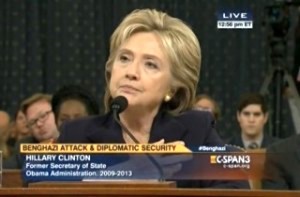 According to a statement obtained by LawNewz, Benghazi Committee Chairman Trey Gowdy said “the committee has identified new facts that significantly impact our understanding of what happened before, during, and after Benghazi.” In 2014, the House established the Select Committee on the events surrounding the 2012 terrorist attack in Benghazi, Libya.  The committee says they plan to release their report, with the revealing new facts, before the summer, which means it could come out in mere weeks.

The timing of the report is interesting because it comes just as former Secretary of State Hillary Clinton is poised to be nominated as the Democratic candidate for president. Clinton has come under fire for her handling of the attacks which killed U.S. Ambassador J. Christopher Stevens and U.S. Foreign Service Officer Sean Smith.

Gowdy said in a statement:

“This investigation and the committee’s final report is about the four brave Americans we lost in Libya, getting the truth for their families and all Americans, and conducting effective congressional oversight to prevent what happened in Benghazi from happening again. Anyone looking for a report focused on the former Secretary of State will be disappointed. This investigation is not about her, and the report will not be about her either. She is an important witness whose decisions impacted virtually all aspects of Benghazi, but she is a single witness among the soon to be 100 interviewed by the committee.”

Democrats have already fired back saying the investigation is a total waste of taxpayer money, and hasn’t produced anything new. Rep. Elijah E. Cummings, Ranking Member of the Select Committee on Benghazi released this statement:

“Republicans have now spent more than two years and nearly $7 million of taxpayer funds for the illegitimate purpose of bringing down Hillary Clinton’s poll numbers, as Kevin McCarthy admitted.  The Select Committee has discovered no new evidence that contradicts the core findings of the previous bipartisan and independent investigations. Republicans are desperate to hide the truth, so they are selectively leaking misleading information to fit a partisan political narrative, withholding interview transcripts from Democrats to prevent us from publicly releasing the facts to the American people, and completely cutting out Democrats from drafting the Select Committee’s final report.”

Right now, the committee is working to declassify as many documents as possible. In addition to the report, the committee hopes to release the transcripts of the dozens of witnesses who were interviewed.