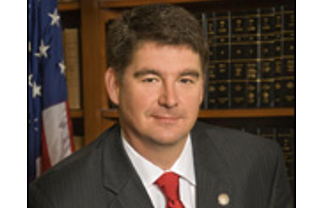 On Thursday, flags nationwide are at half-staff in memory of the 49 people who died in the mass shooting of a gay nightclub. One county commissioner refuses to do it. Tucker Dorsey, Baldwin County Commissioner, says it’s not a “valid circumstance or memorial as specified in the U.S. flag code.”

That’s not enough for Commissioner Dorsey. In a statement published to Facebook, he said the order is “inconsistent with the adopted flag code.” The law he cited, 36 U.S.C. § 175, says the flag should be put at half-staff to commemorate Memorial Day, and the deaths of high-ranking government officials, among other incidents.

In the wake of Sunday’s shooting, he claims it’s a better show to keep the flag up there, “holding our head up with courage above all others.”

You can read Dorsey’s full statement here. He said he made the same decision after the San Bernardino shooting and Paris terror attacks:

On Sunday, Omar Mateen killed 49 and injured 53 people at an Orlando, Florida nightclub. It is the worst mass shooting in U.S. history. It is common practice set flags at half-staff in the wake of highly publicized tragedies. In his tenureBarack Obama has issued 66 proclamations to set the flag at half-staff. According to USA Today, his predecessors George W. Bush and Bill Clinton issued almost as much: 58 and 50, respectively.
–