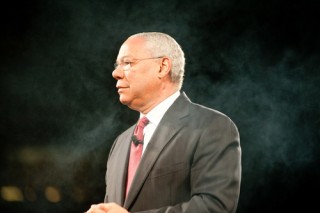 The mass leak of Colin Powell’s emails on Tuesday night sent journalists scrambling. The biggest and immediate headlines were, of course, his feelings on the Hillary Clinton email scandal and Donald Trump’s presidential campaign. In pursuing additional details on that front, LawNewz found multiple emails sent by Powell in late July discussing how much attendees of the secretive, annual, and heavily Republican Bohemian Grove camp hated Trump. Bohemian Grove was described in a Washington Post article where “some of the richest and most powerful men in the world gather at a 2,700 acre campground in Monte Rio, Calif., for two weeks of heavy drinking, super-secret talks, druid worship, […] and other rituals.”

Since Powell sure likes to talk a lot for a member of a secretive, shadowy cabal, our curiosity was piqued, we went looking for more about the “elite” group in the email archive.

Some of it is mundane, like an email reminder about Bohemian Grove’s military luncheon, which offers an “opportunity to renew friendships with those members who became Bohemians through the Service Category.” Perhaps tellingly, out of 2,000 attendees (Powell’s estimation in one of the emails we posted yesterday), the email says there are only about 30 active Grove members who fit that criteria.

To conspiracy-minded readers, the main event is an email addressed to a swath of Bohemian Grove members that was openly carbon copied. The listed names cover all sorts of notables, ranging from members like Powell and Kissinger to The Koch Brothers (Charles and David Koch), Lord James Borwick of the British House of Lords to former Ambassador to Iceland Charles Cobb, Gen. Peter Pace, and even character actor Michael Nouri.

But what really starts to catch your eye is just how many of the emails, both from the Grove and from Powell, are about the camp’s various “entertainment” productions put on by the members. Some if it’s vague, some of it is telling, but all of it is strangely amusing. For example, in the aftermath of this year’s camp, Democratic fundraiser Cappy McGarr sent out an email to Bohemian Grove’s “Team Comedy” to thank them for their efforts in a “Museum Show” titled “A Complete History of Comedy in 50 Minutes.”

Performing in a show written by country singer Clint Black and a pair of executives, this is the cast as described in the email:

And what star studded cast we had in the show: His Majesty King Carlos, General Powell and Dr. Kissinger (they ad- libbed some real funny lines), Ken Burns (fun, funny with great timing, and unfortunately had a good aim with the pie), Mayor Bloomberg, Senator Simpson, Prime Minister Harper, Jimmy Buffett, and Steve Wariner. Thank you for taking the time to add luster to our show.

In 2014, about a month before that year’s camp, venture capitalist Blake Winchell personally invited Powell to submit a video message as part of show “honoring our friend George H.W. Bush.” In a note that makes the political makeup of Bohemian Grove pretty clear, Winchell makes sure to mention that “As you know, it is unusual for the Club to do such a show for a living Bohemian, but there is a groundswell of support behind a show paying tribute to President Bush.” He also notes that while the official date had not been set yet, “we are targeting a Thursday/Friday Ladies night.”

Being that there are no women at the Bohemian Grove camps, “ladies night” appears to refer to their tradition of the members dressed up in drag:

Given the conservative politics of many of the members, it’s one of the more notorious aspects of the Grove’s public legacy. After all,  even the Log Cabin Republicans are now speaking out on how anti-LGBT the party’s platform is. To embrace drag shows, an element of gay culture for decades, is…curious. Even former President Richard Nixon, on one of his personal White House recordings, saw the cognitive dissonance, even if he didn’t express it very eloquently, calling the drag parties “it is the most fa—y goddamned thing you will ever imagine” as part of a longer homophobic rant.