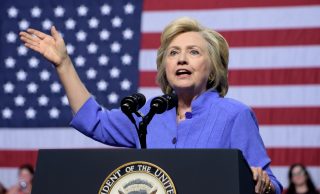 An attorney for Hillary Clinton has filed another motion to get the default judgment against her dismissed in a case filed by the parents of two Benghazi attack victims. Earlier this month, a clerk in federal court in D.C. entered a default judgment in the case after Clinton failed to respond to the lawsuit. David Kendall, Clinton’s attorney, claims that Clinton was not properly served the lawsuit, and therefore the default was “erroneous.” This is the second motion that Clinton’s team has filed in an attempt to get the judgment thrown out.

Pat Smith and Charles Woods are the parents of American U.S. Foreign Service member Sean Smith, and Navy SEAL Tyrone Woods, respectively. Both died during the September 11, 2012 attack on the U.S. consulate in Benghazi, Libya. They sued Clinton for wrongful death, defamation, and intentional and negligent infliction of emotional distress.

Clinton’s attorneys contend that the plaintiffs’ attorney, Larry Klayman, is on a political mission, as evidenced by the more than a dozen lawsuits filed against Bill and Hillary over the years. In addition to improperly serving Clinton, her attorneys claim that the plaintiffs failed to serve the State Department, which is required because the claims involve Clinton’s alleged conduct while she served in her official capacity as Secretary of State.

The parents of the Benghazi victims allege that Clinton lied to them about the cause of the Benghazi attack. She allegedly told them in a private meeting that the attack “was the result of [an] anti-Muslim YouTube video that had been posted online and that the creator of the video would be arrested.” The complaint alleges that “Clinton has negligently, recklessly, and/or maliciously defamed Plaintiffs by … directly calling them liars[.]”

However, in a motion filed Thursday, Clinton’s attorneys also stated that the underlying lawsuit is “facially implausible” and contradicted by the findings of the FBI.

[S]ecretary Clinton has already explained, Plaintiffs’ claims are facially implausible, completely speculative, and flatly contradicted by the findings of the recent FBI investigation. Tellingly, Plaintiffs offer no substantive defense of the merits of their claims or of the reasonableness of Mr. Klayman’s pre-filing investigation in their Opposition.

The plaintiff’s attorney says they have properly served Clinton, and are fighting back.

“Plaintiffs have consciously chosen to serve Defendant Clinton in the manner which they did, and not through the undersigned counsel, because counsel for Defendant Clinton has proven to be untrustworthy,” Klayman wrote in his response filed in court. Klayman is also the executive director for Freedom Watch, a right-leaning advocacy group.

“Defendant Clinton and the undersigned counsel have engaged in a disturbing pattern and practice of behavior which can only be described as thumbing their noses at the law and thus not respecting the rules and procedures which govern the rest of us.”

This fight is far from over.