Can Man Sue Who Was Misidentified by Police as the Suspect in Dallas Shootings? 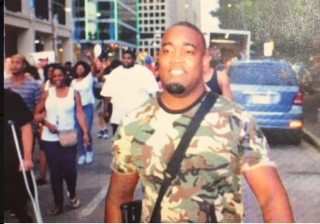 Amid the confusion in the immediate aftermath of the deadly attack that left at least five officers dead, the Dallas Police tweeted the picture of a man carrying a rifle and called him a suspect.  Around the same time at a press conference on Thursday night Dallas Police Chief David Brown also referred to the man as a ‘person of interest’.  Within about an hour of the release of the photo, additional footage surfaced that appears to exonerate the man of any involvement in the attacks. A tweet from police later confirmed that. Now, that man’s attorneys are speaking out and criticizing the Dallas Police Department for rushing to judgment. Understandably, he is upset that his public image has been linked to such a heinous event. The interesting legal question is: can he sue for defamation or anything else? And would he have a case?

Legal experts consulted by LawNewz.com say if he were to bring case against the police department, it would be an extremely tough one to win. Generally speaking, cities have governmental immunity, and are protected if they are acting within the course of their official duties. Governments are also generally protected from torts such as defamation.

“Unless there is evidence of an outright foolish mistake, I just don’t think the lawsuit would be going anywhere,” Eugene Volokh, a UCLA law professor and free speech expert told LawNewz.com.

The man who was evidently mislabeled as a suspect on the Dallas Police Department twitter account has been identified as Mark Hughes.  This picture of Hughes was splashed across the internet and television screens across the country late last night.

This is one of our suspects. Please help us find him! pic.twitter.com/Na5T8ZxSz6

The photograph shows Hughes was carrying a rifle last night at the Black Lives Matter protest in Dallas, but as LawNewz.com reported, “open-carry” is legal in Texas.  The Dallas television station WFAA spoke with Hughes’ attorney, Michael Campbell Jr., said his client was not involved in the shooting.

“A friend gave him a call and said we see your picture all over social media and they are naming you as a person of interest in the shooting down here,” Campbell told WFAA. “And immediately he took his shirt off and gave his gun to the police officer.”

Around 3:30 AM CDT on Friday morning, a Dallas police public information officer sent out another tweet confirming that Hughes was no longer a suspect or a person of interest in the case.

This man cooperated, was interviewed, released. He is not a suspect/person of interest. @DallasPD #dallas https://t.co/bG8awl6RKx

Campbell, along with two other attorneys, Corwyn Davis and Paul Saputo, now represent Hughes and they told WFAA on Friday they are angry with how the police handled the situation.  They said Hughes’ has received death threats due to the police calling him a suspect and person of interest.  Saputo appeared to be especially angry, telling the news station:

“Our clients did nothing wrong.  Google their names right now, look at them on Twitter and Facebook. Right now they are accused of the most heinous act that we can imagine — that changed this city forever. They plastered his picture on Twitter, gave it to the media. The world saw him as a mass murderer. Why?

Because he was a black man and he had a gun. That was a fundamental error and it was grave and it hurt him and it hurt us. It hurt us as a country and it is only going to contribute to where all this is headed — and it is not a pretty picture.”

Given the chaos in the aftermath of this horrific event, it might be understandable that the police wanted to speak with Hughes.  For this reason, legal experts tell LawNewz.com that the Dallas police department will almost certainly have immunity from any legal action that Hughes’ might bring.  However, Hughes could potentially bring a lawsuit against the investigator or person who authorized the photo to be tweeted, but he would have to prove that person acted with negligence.

“When reasonableness is judged, it is judged based on the circumstances which is a chaotic situation,” Volokh said,  “When it is utterly urgent to be able to track down a suspect, a lot more slack is cut under the negligence standard.”

What about news outlets that reported it? Could they be sued? If a news outlet just reported what police told them about the man, they are safe. If they implied anything more, they could be in trouble. An example of this is the recent The New York Post lawsuit. In that case, the newspaper settled a lawsuit after posting a front page story with the headline “Bag Men” which showed two men who they claim police were looking for in relation to the Boston Marathon bombing. The front cover strongly suggested that the men were suspects, even though they were not. And, in fact, it was later determined they had nothing to do with the event. This case is different because the Post did more than just merely report on what police relayed.

In general, though, media outlets are given great latitude to report on what police tell them. In fact a recent Texas Supreme Court case dealt with a very similar issue, and ruled in favor of a news organization that was reporting on a State Medical board’s order.

“The media must be free to accurately report the results and developments in an official proceeding, the Court said, without having to first independently confirm that the underlying evidence or findings are themselves correct,”attorney Carrington Coleman wrote in summarizing the Supreme Court’s decision in a recent blog post.

This is not to downplay what happened to Hughes but unfortunately he likely will not be able to hold the police responsible.

That said, his attorneys have also claimed that he was treated harshly during questioning by the investigative authorities.  If true, the police could still face a lawsuit based on the violation of Hughes’ civil rights during questioning.