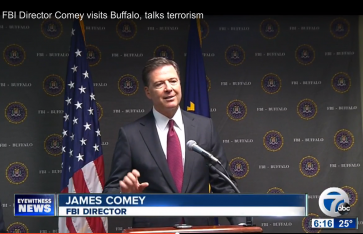 FBI Director James Comey has been the target of withering attacks by Democrats and Hillary Clinton supporters over the past several days, ever since he informed lawmakers about the renewed investigation into Clinton’s private server.  The Clinton campaign — desperate to portray Hillary as the victim and deflect attention away from her “extremely careless” conduct — began trying to reframe the issue to make Comey the bad guy.   Sympathetic media outlets were quick to jump on board with the new narrative and looked for anything to paint Comey as the bad guy, no matter how partisan or absurd.

On Wednesday, it all hit what we can only hope is rock bottom after Buzzfeed used the alleged underage victim in the Anthony Weiner sexting investigation to attack the FBI Director.

Yes, you read that correctly.  Buzzfeed evidently thought it would be a good idea to not only to reach out to Weiner’s alleged victim, but to then use her comments in an effort to smear the Comey over his handling of the Clinton email investigation.

The headline of the article reads:  “Teen Who Allegedly Got Weiner Sexts ‘Upset’ With Comey”

The article goes on to say the alleged victim and her father expressed frustration that they were not informed ahead of time that Comey was going to send a letter to lawmakers.

“The FBI asked for me to speak to the media as little as possible. I have tried to stay quiet, but Comey has upset me,” Weiner’s alleged victim reportedly told Buzzfeed. “The last thing that I wanted was to have this become political propaganda.”

The victim’s father told the news outlet that he was angry at the FBI for releasing  “the story of Weiner’s server before we could drive home from the site where she was interviewed.”  He also said they “got a call from a media member before the FBI local contact texted to check on [them].”

It is difficult to criticize the alleged victim here, but if they were concerned about media exposure and the story being used for political purposes, it seems odd that they gave their story to the Daily Mail back in September.

That aside, the real issue here is Buzzfeed taking advantage of the situation to further put the blame in the lap of the FBI Director.

Let’s be clear, it is not Comey’s fault that Weiner allegedly decided to exchange lewd messages with a minor. Nor is it Comey’s fault that Clinton decided to squirrel all of her emails away on a private server.  What’s more, Comey never actually said anything about the Weiner probe in his letter.  That information came out through media leaks.

The alleged victim’s father was actually very critical of Clinton and is quoted as having serious regrets over casting his vote for Clinton prior to learning details about the new investigation.

“With the recent developments with my daughter, I can say that I would likely not have voted for either of these clowns if I had it to do over again,” the alleged victim’s father said. “How do you not know who works for you? How could you have so many sleazeballs close to you?”

But you wouldn’t know that from the headline.  Putting the blame on the person who created this mess (Hillary) does not fit the narrative, so it had to buried deep towards the end of the article.

This is an opinion article. The views expressed in this article are those of the author.