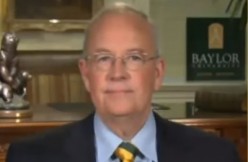 Kenneth Starr—the same lawyer whose investigation led to President Bill Clinton’s impeachment for lying about an affair—is in trouble for reportedly bungling sexual assault cases as president of Baylor University, according to a statement released Thursday.

The school said Starr’s investigation of allegations against football players “reflect a fundamental failure.” Under Starr’s leadership, the school was not compliant with federal statues like Title IX and the Violence Against Women Reauthorization Act of 2013. It took up to two years to address at least one allegation, and apparently, there was retaliation against at least one alleged victim.

“Actions by University administrators directly discouraged some complainants from reporting or participating in student conduct processes and in one instance constituted retaliation against a complainant for reporting sexual assault,” the statement read.

“We were horrified by the extent of these acts of sexual violence on our campus,” said said Richard Willis, chair of the Baylor Board of Regents. “This investigation revealed the University’s mishandling of reports in what should have been a supportive, responsive and caring environment for students.”

Starr will remain as the school’s chancellor, but the football team’s coach, Art Briles, has been fired. Athletic director, Ian McCaw, received a sanction, and is on probation.