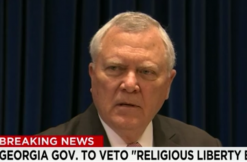 Georgia Gov. Nathan Deal announced Monday he will veto a controversial bill that pits faith-based organizations in the state against LGBT residents. The bill, HB 757, would have barred government penalties against faith-based organizations that refuse to serve someone if it would violate a “sincerely held religious belief” or hire someone “whose religious beliefs or practices or lack of either” violate its religion, according to WSB-TV.

This decision comes after corporations pressured the governor to fight the measure. In a press conference Monday, Deal said the state would have lost jobs if he had signed the bill. The NFL went as far as to say that this law would prevent Atlanta from hosting the Super Bowl. (The city is home to the Falcons)

“Georgia is a welcoming state,” Deal said. “It is full of loving, kind, and generous people.”

And this came really close to being enacted, too. Both houses of the state legislature had passed it. In Georgia, two-thirds of both legislative houses are required to override a veto.