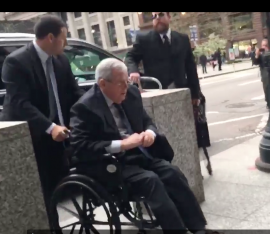 Former House Speaker Dennis Hastert was sentenced to serve 15 months in prison at the Everett McKinley Dirksen United States Federal Courthouse in Chicago on Wednesday.  In addition, Hastert was sentenced to two years of supervised release and ordered to not have contact with the victims.  Hastert pleaded guilty last year to illegally structuring bank withdrawals to pay $1.7 million to cover up wrongdoing from his time as a high school wrestling coach over 40 years ago. He is accused of molesting several young boys while he served as a coach of the team.

Jolene Burdge, the sister of one of Hastert’s victims, testified at the sentencing.  During her testimony, Burdge reportedly looked at Hastert and said, “I hope I have been your worst nightmare.”

“I hope I have been your worst nightmare,” she tells #Hastert.

Scott Cross, previously only known as Individual D, also testified at the hearing.  He is the younger brother of for Illinois GOP leader Tom Cross, according to Chicago Tribune reporter Christy Gutowski.  Reporters in the courtroom say Scott Cross broke down in tears on the stand as he testified that Hastert sexually abused him during his senior year of high school, in 1980.

Scott Cross, “it’s important for me to tell the truth finally about what happened to me. I could no longer remain silent.”

Cross said he revealed the sexual abuse to his wife, brother and parents last year after Hastert was charged last year.

Tom Cross was #Hastert political protege but never knew what his mentor did to his younger brother Scott, who publicly IDs self as victim.

Hastert’s head hanging now, eyes on floor as his attorney describes how all his good words “have been eclipsed” by his misdeeds years ago.

Hastert was last to address the court, reading from a written statement he admitted to abusing at least one victim.

#Hastert at mic now. “I’m deeply ashamed to be standing before you today”

Hastert apologies to former wrestlers, “what I did was wrong and I regret it … I took advantage of them.”

Judge: So you did sexually abuse them? Hastert: Yes. Helped back to wheelchair by attorneys

Judge tells Hastert about A:, “you tried to set him up. You tried to frame him.”

Judge Durkin reading paragraph of a letter from SNAP – Survivors Network of those Abused by Priests. Called the letter “powerful.”

Durkin: “Nothing is more stunning than having the words of child molester and former Speaker of the House in the same sentence.”

Judge Durkin: “Some conduct is unforgivable no matter how old it is.” #hastert

Prosecutors recommended Hastert serve up to six month in prison, while his attorneys asked for probation.  Hastert’s attorneys pointed to his recent health problems, in addition to other factors as grounds for probation.  They said Hastert was “close to his demise” when he had his stroke last year. Hastert’s attorneys also acknowledged abuse by Hastert for the first time at the hearing. The maximum sentence Judge Durkin could have imposed was up to five years in federal prison.

After the sentencing hearing, the U.S. Attorney’s Office for the Northern District of Illinois issued the following statement:

“With this case, the Office sought to hold Mr. Hastert accountable for the crimes he committed that could still be prosecuted: illegally structuring cash withdrawals and lying to the government about his motive for engaging in that activity. All of us have been inspired by the strength and bravery of the victims and witnesses who came forward in the most challenging of circumstances. As in all cases, the Office is dedicated to doing everything we can to help victims and their families seek justice. It is our hope that the sentence imposed today will promote respect for the law.”