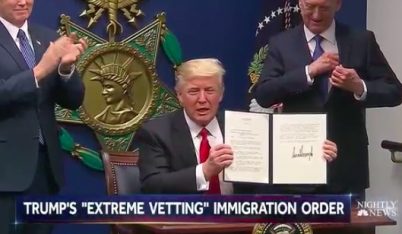 CNN reports the plaintiffs had already arrived in the United States or were en route when the order was signed late Friday.  The decision reportly allows those individuals to enter the U.S. legally, in a major blow to Trump’s attempt to prevent citizens from several countries from entering to the U.S. for the next 90 days.

According to reports, Trump’s Executive Order barred citizens of seven Muslim-majority countries from coming to the US for the next 90 days and suspended the admissions of all refugees for 120 days.

The lawsuit was filed by the ACLU and the organization released a lengthy statement Saturday night obtained by LawNewz:

“Clearly the judge understood the possibility for irreparable harm to hundreds of immigrants and lawful visitors to this country. Our courts today worked as they should as bulwarks against government abuse or unconstitutional policies and orders. On week one, Donald Trump suffered his first loss in court,” ACLU Executive Director Anthony D. Romero said.

Our courts today worked as they should as bulwarks against government abuse or unconstitutional policies and orders.

This is a breaking story and LawNewz will provide updates as more information is available.