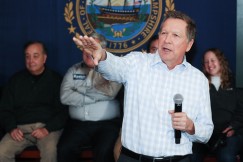 With the presidential primaries in full swing, a controversial bill to defund Planned Parenthood is set to land on the desk of Ohio Governor John Kasich. After consistently strong debate performances and an encouraging second-place finish in New Hampshire, Kasich will have to evaluate a bill that creates a funding standstill for organizations that promote or perform abortions. The Ohio House of Representatives voted 59-32 to defund the organization.

The bill would require Ohio’s Department of Health to ensure that both state funds and federal funds are not allocated to “perform or promote elective abortions” in Ohio. But HB 294 also goes one step further. The bill, sponsored by Representatives Bill Patmon and Margaret Conditt, a Democrat and Republican respectively, would also prevent the Ohio Department of Health from contracting or affiliating with any entity that promotes or performs elective abortions.

Planned Parenthood and other women’s health organizations receive state and federal funding to support breast and cervical cancer screenings and contraception for women, among many other services.

Kasich is scheduled to resume campaigning in South Carolina as the GOP readies for its first Southern primary on Feb. 20.