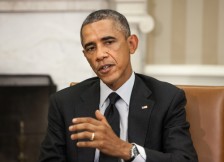 Obama listed three criteria that he is using to determine his pick to replace the late Justice Antonin Scalia. First, he wants someone with excellent credentials and an “independent mind.” Second, he seeks a person who understands that the Court’s role is to interpret the law, not create it. And third, he wants a judge “who approach[es] decisions without any particular ideology or agenda” who has a “respect for precedent.”

These factors would lead one to believe that Obama is looking for a centrist who could potentially appeal to both sides of the aisle. An independent who does not believe in legislating from the bench could be a suitable replacement for strict originalist Scalia. The conservative often lamented decisions that stretched the law in order to achieve desired goals. At the same time, abiding by precedent would mean upholding decisions like Roe v. Wade and Obergefell v. Hodges, which is good news for liberals looking to protect abortion and gay marriage.

But it’s the last factor that shows which way the President is leaning, and make no mistake about it, it’s to the left. He says that he wants an individual who will use their personal experience in situations where “a judge’s analysis necessarily will be shaped by his or her own perspective, ethics, and judgment.” Necessarily? The President won’t win over strict interpreters of the Constitution by saying a justice will have to use anything other than legal analysis to decide a case. He goes on to say he wants a judge with “a keen understanding that justice is not about abstract legal theory, nor some footnote in a dusty casebook,” but “life experience earned outside the classroom and the courtroom.” Is that right? Justice isn’t about legal theory or cases? Explain that one to students toiling away in law school. This seems to contradict what he said about the importance of interpreting the law and having respect for precedent. It appears to endorse the idea that what happens in the world should influence the law, and not the other way around.

But not necessarily. Obama ends the discussion of that third factor by promoting the importance of understanding how the law affects people’s lives “in rapidly changing times,” a phrase sure to terrify Republicans who would prefer to repeal certain decisions to set the country back to where it was decades ago. But we do live in a rapidly changing world, as evidenced by the current battle between Apple and the FBI over encryption. This is just one example of a complex issue that requires an understanding of modern concepts that were unimaginable ten years ago, let alone when the Constitution was written. Anyone serving on the Supreme Court must have the ability to grapple with these issues from an informed perspective. But it seems obvious that Obama is also referring to socially progressive issues as well. And of course he is, he’s a Democrat. Any President from either party would want to appoint someone in line with their beliefs.

Obama uses a lot of buzzwords in his post so that those who value “respect for precedent” or an “independent mind” may hope for a more centrist nominee. But his love letter to personal experience in a changing world indicates a preference for a liberal interpretation of the law. The President has not offered any hints as to the identity of his nominee, but he or she certainly won’t be the next Scalia.