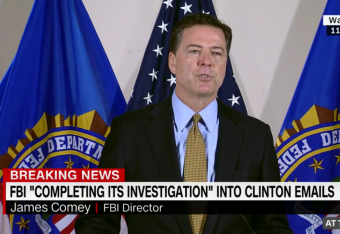 A new report published on Monday afternoon claims FBI Director James Comey opposed coming out with a statement accusing Russia of attempting to meddle in the 2016 election.  An anonymous former government official reportedly told CNBC that Comey opposed issuing a statement so close to the November 8 election.  The same source contends there is now confusion among some “government insiders” that Comey had these concerns about the statement on Russia but not updating lawmakers about the existence newly uncovered emails that may be related to the Clinton server probe.

The suggestion, of course, is that the allegation is evidence of some serious hypocrisy on Director Comey’s behalf in how he chose to handle both matters.  In fact, the Clinton campaign was quick to jump on the story, sending out this tweet on Monday afternoon:

Such a suggestion just does not hold up and the attempt to link the two is simply a continuation of the Clinton campaign’s increasingly desperate effort to discredit the FBI Director.

In fact, the Department of Homeland Security (DHS) and The Office of the Director of National Intelligence (ODNI) issued a joint statement on October 7, 2016 that formally accused Russia of attempting to interfere in the election.

“The U.S. Intelligence Community (USIC) is confident that the Russian Government directed the recent compromises of e-mails from US persons and institutions, including from US political organizations,” the joint statement reads. “These thefts and disclosures are intended to interfere with the US election process.”

CNBC’s source claims Comey agreed with the assessment “but was against putting it out before the election.”  That is why, the source says, the statement came from the ODNI and DHS, not the FBI.

An FBI spokesperson did not respond to CNBC’s request for comment.

But there are several reasons to question the source’s assertions.  Most importantly, there was seemingly no reason under these circumstances for the FBI to sign on to the statement to begin with.

The Director of National Intelligence, James Clapper, serves as the head of the 16 government agencies that make up the U.S. Intelligence Community, including relevant divisions within the FBI. Additionally, in 2015 President Obama directed Clapper to form the Cyber Threat Intelligence Integration Center (CTIIC) that would serve as “a national intelligence center focused on ‘connecting the dots’ regarding malicious foreign cyber threats to the nation….”

As the threat of cyberattacks from foreign countries has grown over the past several years, Clapper has regularly served as the point man for the U.S. government’s official response. It stands to reason that Clapper would continue in that role in addressing the Russian backed cyberattacks directed at our political system.  And, as a practical matter, a statement from Clapper’s office carries the weight of the entire United States Intelligence Community, and not just one of its agencies. So why would the FBI need to sign off on the release?

Similarly, throughout 2016 the Department of Homeland Security has served as the lead agency in protecting the actual voting systems from cybersecurity threats.  There has been an ongoing debate for months at the state level over whether to accept help (see money) from the DHS to shore up the election systems from cyberthreats.  A new report published on Monday says all but eight states have now decided to accept help from the DHS before the upcoming election.  Given the role the DHS has taken in this election cycle, and the nature of the Russian threat, it is understandable why they would sign on to the joint statement.

While the source’s claims make for great speculation, we need more evidence to support the allegations.  The simple fact that the FBI did not sign on to the joint statement is insufficient once you consider the roles the DHS and ODNI have played throughout the 2016 election season.