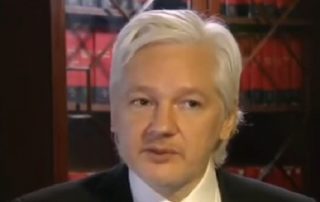 On Monday, Wikileaks held a press conference addressing a U.S. report on Russian hacking related to the Presidential election. The report, written by the Office of the Director of National Intelligence (ODNI), was declassified on Friday. It says that “Russian President Vladimir Putin ordered an influence campaign in 2016 aimed at the US presidential election,” and that the Russian campaign sought to hurt Hillary Clinton‘s chances in the election while boosting Donald Trump‘s.  The report specifically alleged that the Russian government worked with Wikileaks to spread information that they collected in hacking operations.

At the press conference, Wikileaks founder Julian Assange addressed this accusation. First, he mocked the nature of the report itself “This is a press release,” Assange said. “It is clearly designed for political effect, and U.S. intelligence services have been politicized by the Obama administration.” He also criticized how Americans conflated the hacks of Democratic officials’ emails and Wikileaks’ publishing them with the notion that the actual U.S. election was hacked, which is very different. Assange said that as a result, many Americans went to the polls believing that actual voting machines were hacked.

Assange also denied that the hacks were meant to help Trump. He noted that while the emails weren’t released until July 2016, when the hacks were actually done, Trump was not yet considered a serious contender for the presidency. Assange admitted that when Wikileaks released the emails, he believed that Clinton was on her way to winning the election. When asked if he had hoped for a Trump victory, Assange said that he didn’t hope for any particular outcome.

The original classified report, which ODNI says had more details and evidence than the version released to the public, was provided to President Barack Obama and others approved by Obama. The report described a belief that Russian intelligence used Wikileaks to release information that they acquired in their operation. U.S. intelligence believed that Russian actors used the name “Guccifer 2.0,” claiming to be a Romanian hacker. The report says that while Putin has denied government involvement, U.S. intelligence officials have “high confidence” that Russian government actors acquired private information from the Democratic National Committee and Democratic officials, and sent it to Wikileaks.

The ODNI report also mentions that Wikileaks has “actively collaborated” in the past with Russian propaganda outlet RT (formerly known as Russia Today). The report did point out that RT America is formally disassociated with the Russian government because they are financed by an “autonomous nonprofit organization.” RT’s leadership is said to have acknowledged that this is done in order to get around the Foreign Agents Registration Act.