Did You Know Marco Rubio Is Still $1.9 Million in Debt From His Last Campaign? 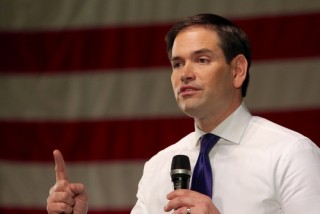 As Marco Rubio embarks on his (surprise?) campaign for Senate, he leaves behind an old one that is still very much in the red. As our partners over at OpenSecrets.org pointed out, while his presidential bid ended in March,  Rubio’s candidate committee is still nearly $1.9 million in debt as of the end of May, according to the latest filings. The campaign has about $24,000 left in hand.  That’s a lot of money to owe especially when you compare it to other candidates who dropped out of the Republican race. For example, Jeb Bush owes about $261,000, Ben Carson only owes about $211,000, and Ted Cruz owes nothing! Nobody touches how much Rubio needs to fork over.  The news isn’t exactly shocking. Last year, The New York Times did an entire profile painting Rubio’s career as “bedeviled with financial problems.”  In fact, they write, early in his political career he intermingled personal and political money and used state Republican Party credit cards to pay for a paving project at his home and for his family travel.

So LawNewz.com did some digging to try to figure out who he owes all this money too. For starters, it’s important to put this in perspective. He raised nearly $50 million, but as you can see his net operating expenditures exceeded that.

His largest outstanding bill for $721,031 is to a company called FLS Connect LLC.  The company, based out of Saint Paul, Minnesota,  specializes in voter outreach and phone call campaigning. Another one that came to our attention, Rubio’s campaign still owes about $170,000 in legal fees to a Virginia-based law firm called Holtzman Vogel Josefiak PLLC. If that name sounds familiar, that’s because, we wrote about them back in February. The law firm was apparently behind those shady voter “shaming” mailers in New Hampshire. You remember, the ones that attempted to embarrass people into voting in the primary by revealing their voter score.

Here is a list of all of Rubio’s debts as of the end of May:

So far, we have been unable to reach anyone from Senator Marco Rubio’s office, but if we do, we will update this post with his response.