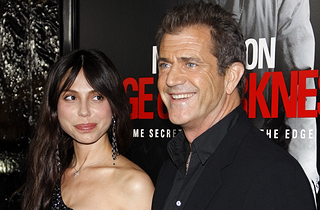 On Tuesday, California’s 2nd Appellate District ruled (PDF) on a celebrity case that had been out of the public eye for a while: Mel Gibson’s disputes with his ex-wife, Oksana Grigorieva. The case is technically titled ““M.G. v. O.G.,” but the numerous details in the order make it perfectly clear who’s involved. The court affirmed a previous ruling in Gibson’s favor to the effect that that Grigorieva violated the terms of an out of court settlement between the two by addressing her domestic abuse allegations against Gibson.

You may recall that in 2010, Grigorieva recorded her phone conversations with a disturbingly unhinged Gibson, including one (embedded above) where he threatened to kill her, saying “I’ll put you in a f—ing rose garden you c–t! You understand that? Because I’m capable of it. You understand that?” If he had much of a career left, that changed. Grigorieva sued Gibson in separate cases (one for paternity of their child, one for battery and defamation), and according to the appellate ruling, here’s how those were resolved:

At the same time, the parties entered into a separate settlement agreement to resolve O.G.’s civil claims, pursuant to which M.G. agreed to pay O.G. a total of $750,000 in three equal installments spread over the course of five years. As part of the settlement agreement, O.G. agreed to keep confidential “any and all information and facts related to the asserted claims and events underlying this Agreement.” The agreement specified that a breach of the confidentiality obligation would result in O.G.’s forfeiture of all outstanding installments of the $750,000 settlement payment.

From there, nothing really happened until Grigorieva appeared on The Howard Stern Show on May 21, 2013:

While Grigorieva never outright said in the interview that Gibson physically abused her, in the context of the interview, it’s clear that she’s giving credence to Stern’s statements about Gibson hitting her. That’s where Gibson objected, and that’s why the appellate court agreed with Gibson. From the ruling:

While it is true that the confidentiality clause did not require O.G. to police what other people might say about her past relationship with M.G., it expressly restricted her capacity to make statements “related to” her domestic violence claims against him.

Here, the Settlement Agreement’s express purpose, as stated in its recitals, was “to resolve all pending issues, claims and/or potential claims arising out of the events underlying [O.G.’s] asserted battery, defamation, and other nonspecific claims [against M.G.].” Construing the “related to” language according to its popular meaning and in the context of the larger instrument’s purpose, it is reasonable to infer that the parties intended the confidentiality clause to encompass not only express statements about O.G.’s domestic violence claims against M.G., but also implicit assertions about hose claims made through reference to what others might say.

Thus, even accepting O.G.’s premise that she was not required to control what others would say, nor prohibited from speaking about domestic violence generally, it still follows from the language of the confidentiality clause that she could not insinuate M.G. committed domestic violence on her by piggybacking on Stern’s comments about what she had “been through with

The official result: “The order discharging M.G.’s obligation to pay further amounts under the Settlement Agreement is affirmed. The order awarding M.G. sanctions is also affirmed. M.G. is entitled to his costs for this appeal.” Also, this case cannot be cited in future lawsuits as precedent-setting caselaw.