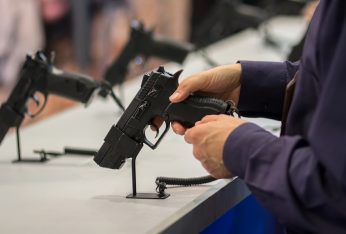 The Ninth Circuit Court of Appeals issued an opinion on Wednesday to uphold a California law that requires a full 10-day ‘cooling off’ period for all lawful purchases of firearms, even for purchasers who have previously bought guns and passed background checks in less than 10 days.

The State of California appealed the ruling and a three-judge panel from the Ninth Circuit heard oral argument on the matter earlier this year.  Nearly ten months later, the Ninth Circuit handed down its opinion on Wednesday, overturning Judge Ishi’s ruling and reinstating the 10-day “cooling off” period for all gun purchasers in the state.

“Applying intermediate scrutiny analysis, we hold that the law does not violate the Second Amendment rights of these Plaintiffs, because the ten day wait is a reasonable precaution for the purchase of a second or third weapon, as well as for a first purchase,” the majority opinion states.

Intermediate scrutiny analysis test requires the state to prove the law “promotes a substantial government interest that would be achieved less effectively absent the regulation.”

The Ninth Circuit found there is “nothing new in having to wait for the delivery of a weapon” because “[b]efore the age of superstores and superhighways, most folks could not expect to take possession of a firearm immediately upon deciding to purchase one.”  Therefore, they determined the 10-day waiting period was not a substantial burden in one’s Second Amendment rights.

Additionally, the Ninth Circuit took issue with the lower court’s determination that the cooling off period could not be justified as an effective crime deterrent when applied to those who already owned guns and passed background checks.  In essence, the lower court reasoned that if a gun owner wanted to go act impulsively, they already had the means to do so and did not need to go buy another gun to accomplish the task.

The district court’s assumption is not warranted. An individual who already owns a hunting rifle, for example, may want to purchase a larger capacity weapon that will do more damage when fired into a crowd. A 10-day cooling-off period would serve to discourage such conduct and would impose no serious burden on the core Second Amendment right of defense of the home identified in Heller.

Ultimately, the Ninth Circuit found the law did not violate the Second Amendment because “there is a reasonable fit between important safety objectives and the application [of the waiting period] to the Plaintiffs in this case” because it “provides time not only for a background check, but also for a cooling-off period to deter violence resulting from impulsive purchases of firearms.”