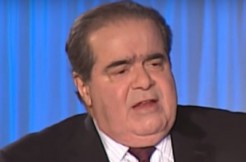 “Individual members of the Law School faculty hold different views about Justice Scalia’s jurisprudence, but all recognize that he was among the most consequential figures in the history of the Supreme Court,” the statement, obtained by The National Law Journal, read.

The professors also criticized a recent resolution by the faculty senate voicing concerns over the name change. They said those other teachers weren’t even involved in the law school, and were just butting in.

The name change is tied to a $30 million donation from The Charles Koch Foundation, and an anonymous conservative donor. Critics say this influence would skew the university by making it dependent on right-leaning contributors. After all, terms of the gifts ask the school to notify grantors about the replacement of the Law School Dean.

“Many of us have been watching this happening for a long time,” Bethany Latiecq, professor of human development and family science, told The New York Times. “But this just renews interest in the bigger picture, which is the Kochs’ influence in higher education and the decreasing influence of the faculty over decision making.”

The law professors dismissed such claims.

“The donors have not requested and have not been provided any authority to interfere with faculty governance of the Law School, or the selection or retention of its Dean,” the wrote in the Thursday statement.

Scalia, a controversial Supreme Court Judge, died in February. His replacement has yet to be confirmed, though President Barack Obama has nominated Merrick Garland.

[screengrab via The National Press Club]
–