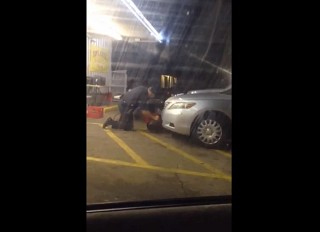 The store owner who witnessed Officer Blane Salamoni shoot and kill Alton Sterling in a parking lot last Tuesday is now suing him, other officers, and the city of Baton Rouge, Louisiana. According to The Daily Beast, Abdullah Muhlafi, owner of the Triple S Mart, claims that after Officer Salamoni shot Sterling, he told other officers to confiscate his “entire store security system.”

Muhlafi’s lawsuit says that he demanded that the police get a search warrant before taking his property. The Daily Beast found that officers never applied for a warrant, nor did Muhlafi sign a consent form. Police also allegedly took Muhlafi’s phone — which he had used to record video of the shooting — and then Lt. Robert Cook and Officer Timothy Ballard allegedly locked him in the back of a police car for four hours, only letting him out to go to the bathroom. Even then, the lawsuit says, Muhlafi wasn’t allowed to use his store’s restroom; he had to go outside on the side of the building, an officer nearby, “in full view of the public.” He was then allegedly kept at a police station for another two hours. He claims that he was not permitted to call family or an attorney the entire time.

The lawsuit is against Salamoni, Cook, Ballard, Police Chief Carl Dabadi, and Officer Howie Lake, who shouted “Gun!” before Salamoni shot Sterling, even though video showed that Sterling did not have a gun in his hand.

Louisiana Congressman Cedric Richmond told The Daily Beast that he was concerned over how police obtained the surveillance video from Muhlafi’s store. “That’s why I had a strong push for feds to come in,” he said. “I think the public has a right to know under what authority the tapes were seized.”

A spokesman for Governor John Bel Edwards said that the governor “believes all evidence should be collected in accordance with the law,” but he did not speak about the details of the matter.