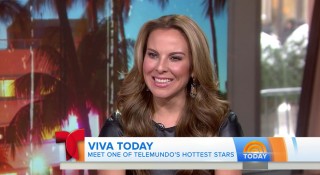 Actress Kate Del Castillo is now saying she had no idea about Sean Penn‘s intention to write an article following a clandestine meeting in the jungle with El Chapo.

Sources told the Daily Mail that del Castillo only learned about the article when “Penn blurted it out moments before the meeting” with escaped prisoner Joaquin ‘El Chapo’ Guzman. Del Castillo is reportedly upset that she will not get what she calls ‘legal immunity’ as a journalist because she was not aware of the deal.

Earlier this month, Penn published a rambling tell-all of his adventures in an obtaining an exclusive interview with El Chapo, who had made an elaborate escape from a Mexican prison.  The article was published by Rolling Stone shortly after El Chapo was captured. Legal experts contend  that while Sean Penn may be asked to testify, he will probably not face any criminal charges.

The actress may not be so lucky. Earlier this week, Mexican authorities announced they were investigating del Castillo on suspicion of money laundering. Authorities are examining her boutique tequila brand, Honor Del Castillo after allegations El Chapo invested in the business. Del Castillo brokered the meeting between El Chapo and Sean Penn.

As a side note to del Castillo, journalists are not “immune” from prosecution. Just like any other citizen, journalists are not allowed to break any laws in the pursuit of obtaining a story or an interview. They are ‘immune’ from revealing their sources under most circumstances.