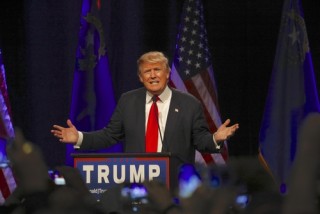 What Donald Trump says on the campaign trail might be crass, blunt and offensive but does it cross the legal line and make him liable for inciting violence? His critics point to a few examples like when he told a crowd at a February rally: “So if you see somebody getting ready to throw a tomato, knock the crap out of ’em, would you?” Or the time Trump said “I’d like to punch him in the face” as a protester was being marched out of a gathering. You can certainly see how someone might take him literally.  There have already been a few examples of violence including a man being socker-punched, and a Breitbart reporter who says she was pushed by a Trump official. But, any prosecutor who brought a case against Donald Trump for inciting violence (at least thus far in the campaign) would have a very difficult case to prove.  Certainly, charges could  be filed (we’ve already heard rumors that a North Carolina Sheriff’s office was looking into a case against him), but the question is would they stick?  The answer, at least based on what we know now, probably not.

“Generally speaking, advocating violence in the abstract — that is not a crime and is protected speech,” UCLA Professor Eugene Volokh told LawNewz.com. Volokh is a First Amendment expert and author of the popular blog Volokh Conspiracy. While he wouldn’t say if he believed Trump crossed the line into criminally inciting violence, he did say a potential case all depends on the facts and what the government can prove beyond a reasonable doubt.

“Most heckling is not illegal, so you can’t use force to stop the hecklers and urging people on the spot to use force to stop the hecklers is illegal,” Volokh explained. However, if the hecklers were doing something illegal (liking throwing tomatoes), urging someone to fight back wouldn’t be illegal. “If the speaker is calling for moderate defense against people who are throwing things, who are punching or shoving, or who are shouting down a speaker,” he added in his blog, that it is probably okay. You can see how things can easily get complicated.

First, let me give you a brief refresher on the standard set forth by the 1969 Supreme Court Case Brandenburg v. Ohio. For someone to be held liable for inciting violence, the speech at issue must be directed to inciting, and likely to incite, imminent lawless conduct.

“Just making statements in the abstract or even statements at a prior rally are just too far disconnected from time and space to constitute actual incitement,” UNC School of Law Professor Mary-Rose Papandrea told LawNewz.com.

For example, in Chicago, before the rally even began, fights broke out and the event was cancelled by the campaign before The Donald could even even say a word. Even in the case last week, where a Donald Trump supporter was charged after sucker-punching a protester, there have been no media reports that Trump directly encouraged that in his rally speech.

“The U.S. Supreme Court has never been clear what how much time can pass between a defendant’s statements advocating violence and the actual violence (or threat of imminent violence),” Papandrea said

“I have little doubt that Trump’s language and general comportment does incite some of his followers to violent behavior, in the way we might use that word in lay English,” First Amendment attorney Floyd Abrams told LawNewz.com. However, legal liability is a different story. Abrams also pointed out that speech must be intentionally done to incite violence.

“I doubt that Trump intended any untoward, let alone, illegal response to his macho posturing. That alone would take him out of the potentially actionable sphere. But it would not forgive him for what he is doing to our political system as a whole,” Abrams said.