13-Year-Old with BB Gun Shot and Killed by Police 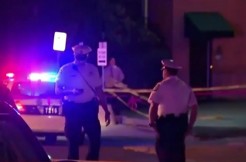 A 13-year-old robbery suspect was shot and killed after pulling a BB gun on cops, police in Columbus, Ohio said in a statement.

They said it happened Wednesday night. Officers were investigating an armed robbery involving several suspects. The alleged victim said one of the thieves had a gun. Cops later found three males who matched the description. Two then fled to an alley where one, 13-year-old Tyree King, “pulled a gun from his waistband,” police say. An officer shot him multiple times, and he later died at the hospital.

“The male with Tyree King was identified, interviewed and released pending further investigation,” police say. “Additional suspects are being sought. Anyone with information is encouraged to call Columbus Police at 614-645-4624.”

According to the statement, this shooting will be investigated internally.