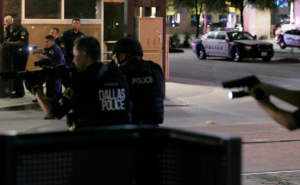 5 law enforcement officers were confirmed killed and 7 officers were wounded in the gunfire that erupted in Dallas.  12 officers in total were shot by coordinated  attack by snipers, according to the Mayor’s office.

BREAKING: DPD Chief David Brown says 10 officers were shot by 2 snipers in downtown Dallas. 3 are dead, 3 are critical, and 2 are in surgery

During a peaceful protest in the name of the recent deaths of two African American men at the hands of law enforcement, rifle gunfire erupted around 9 p.m. local time. Fox News’ Dallas-based correspondent Casey Stegall has reported that the two snipers may have been on or near the top of a parking garage when they fired on Dallas law enforcement.

Although Smith had previously reported on four total deaths, the Dallas Police Chief held a press conference moments ago alongside the Mayor of the city to confirm that the number of deceased is three. Chief Brown confirmed that the total of number officers shot is up to 11, and they are now pursuing the possibility that a bomb threat is linked to the snipers as well. Mayor Mike Rawlings urged all to “come together,” in support of the fallen members of Dallas’ finest and their families first and foremost.

The Dallas Police Department took to Facebook urging people to contact them with any additional information about the suspects:

This story is rapidly developing and we will update this as information becomes available.

UPDATE 12:15 a.m. ET: The Dallas PD has now confirmed that a fourth police officer has died:

With heavy hearts, we are devastated to report a fourth officer has been killed.

UPDATE — 12:32 a.m. ET: Dallas PD now indicating that one suspect is in custody, and that the suspicious package is being investigated by the department’s bomb squad:

UPDATE: 12:58 a.m. ET: Shep Smith has reported that both suspects are now in custody.

UPDATE: 3:13 a.m. ET: The Dallas PD has confirmed that another one of the cops has died, bringing the death toll to 5.

And DART has revealed the name of their officer that was killed: