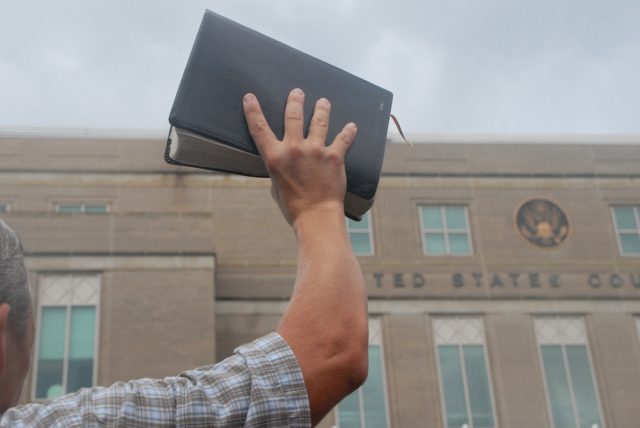 In a January 5 letter sent to Kentucky Department of Education head Kyle Lee, the ACLU accused various Kentucky schools of violating the First Amendment’s Establishment Clause which prohibits government from “respecting an establishment of religion.” The letter reads, in part:

The most problematic courses that we have discovered are not academic and neutral, but rather present the Christian Bible as the only biblical text and Christianity as the one correct religion. In several of these classes, teachers are using the Bible to impart religious life lessons and actively inculcate Christianity…in contravention of prevailing constitutionally acceptable practices. For example, several of the courses we discovered through our Open Records Act requests proselytize, or ask students to proselytize, which has no place in our public schools.

At one school in Barren County, students who take field trips to the South Central Kentucky Cultural Center are then assigned the following prompt, “Devote your writings to an item or items of interest in the religious exhibit relating to faith and religious heritage. Discuss why the reader needs to appreciate this.”

At yet another school, in Letcher County, students are given assignments which ask, “What are some promises in the Bible that God gives everyone who believes in him?” Those same students are also told to “Do your best to build close relationships with other Christians, so that you may help one another through tough times.”

The ACLU notes that the above-mentioned worksheets are culled from two sources which explicitly promote and/or publish Sunday School and Christian education curriculums: Teen Sunday School Place (which describes itself as a resource for Christian youth ministries) and Rose Publishing (which advertises its “easy-to-understand Christian products that help people grow their faith.”)

Other “Bible Literacy” classes in Kentucky didn’t even attempt to feign an educational mission. Instead, they simply rely upon the use of devotional Christian books and documentaries like “God’s Not Dead 2,” “The Five People You Meet in Heaven,” and “The Exodus Decoded.”

[A]ny public school course addressing the Bible must be carefully designed to avoid proselytizing or any suggestion that a religious message is being promoted by the school. It must be taught from an academic, neutral perspective. Teachers must be properly trained in how to teach the Bible from a scholarly perspective, and they must understand the legal limitations of teaching the Bible or religion courses in public schools.

The ACLU is threatening “costly and drawn-out litigation, among other consequences,” if the Kentucky Department of Education doesn’t right the ship viz. the state’s “Bible Literacy” classes.

Law&Crime reached out to Lee for comment. In response, Kentucky Department of Education’s Director of the agency’s Communications Division, Rebecca Blessing, issued the following statement:

In accordance with the process outlined in Senate Bill 1 (2017), the Kentucky Department of Education is working to develop standards that fulfill the legislative directive in HB128 and comply with applicable constitutional law. Until these standards are finalized and further guidance is provided by the department, it is up to each public school district in Kentucky to ensure the curriculum used in any classes allowed under HB128 abides with the letter of the law and the tenets established by constitutional law.