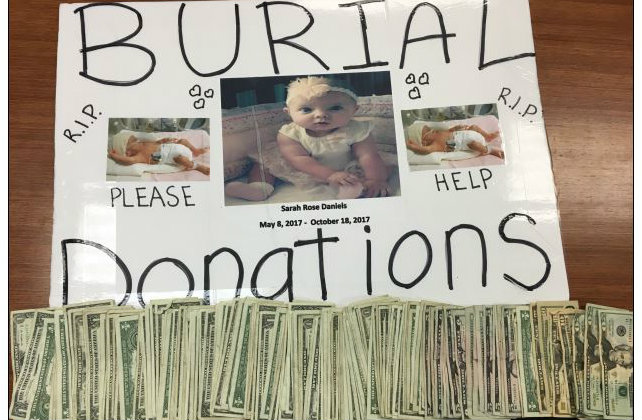 Her name, supposedly, was Sarah Rose Daniels. Just over five months old, the infant passed away last Wednesday. Supposedly. Two women fraudulently collected money for a funeral, according to the San Bernardino Sheriff’s Department. Except there was no need, said law enforcement.

The sheriff’s office said they booked Chastity Doll, 26, on Sunday for panhandling on a street corner. An hour later, they arrested Michele Love, 41, for the same thing at the same location, and discovered evidence that linked her to Doll. Investigators believe these two made signs to ask passerby for donations in funding a baby’s funeral. As seen above, a sign depicted several pictures of the girl, her purported life-span, and requests for cash.

The child belonged to neither woman, deputies said. There was no need for burial money. Both defendants were charged with conspiracy to commit fraud. Jail records obtained by Law Newz did not specify if they had attorneys. Love, who is currently out of custody, is not scheduled for court. Doll, who remains locked up, is scheduled for a court date on the conspiracy charge this Tuesday.