‘Where am I?!’: Woman Totally Flips Out in Video Court Appearance (WATCH) 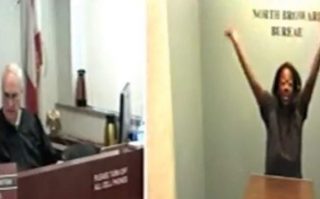 This week, a woman accused of trespass appeared before a judge in Broward County Bond Court. Well, she didn’t appear before him in person, but over video. And she was a little confused about what was going on, to say the least.

While the judge tried to maintain order, the woman questioned where she was, who she was, and, well, just watch:

To be fair, being told that you’re making a court appearance when you’re not in the same room before the judge can be pretty confusing. And, as she pointed out, the audio of the judge’s voice wasn’t matching the video exactly, which can be pretty maddening in any situation, let alone one where you’re being charged with a crime. If she truly didn’t know why she was there in the first place, as she claimed, that sounds like a Kafkaesque nightmare and she probably took it well, all things considered.