We are Not Kidding — A ‘Tree’ Was Arrested for Blocking Traffic 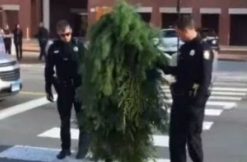 On Monday, cops arrested a man for dressing up like a tree, and blocking traffic in Portland, Maine. Assistant Police Chief Vern Malloch told the Portland Press Herald that 30-year-old Asher Woodworth was cuffed after refusing orders to leave an intersection.

Footage of the dramatic confrontation can be seen here:

Police have arrested a man dressed as tree for blocking traffic on Congress Street…as God is my witness. pic.twitter.com/VUFQY6Vyv0

Woodworth reportedly told cops that he just wanted to see the reactions of others, and how he would “impact people’s natural choreography.” He now faces one count of obstructing a public way, a misdemeanor, and is currently out on bail. The Press Herald reached out to him several times, but he reportedly never agreed to an interview.