‘Tase His Ass!’: Judge Gets Physical In Courtroom Brawl (VIDEO) 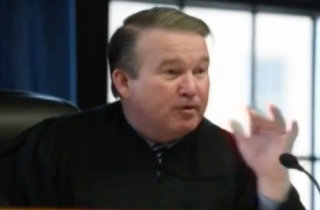 Judge John McBain of Michigan’s Jackson County Circuit Court is no stranger to colorful stories, most famously making national headlines for telling a convicted murderer “I hope you die in prison.” That said, the latest story about the quotable jurist takes the cake, as MLive has surfaced a video from last December where McBain not only had to help physically restrain a defendant, but yelled out that officers needed to “tase his ass!”

Jacob Larson, who was in court for allegedly stalking a woman and violating an order of protection, started to resist being handcuffed by the lone officer in the court, who MLive says was a “deputized law clerk.” With no other law enforcement officers in the courtroom, McBain jumped into action like the “Simpsons” character of the same name, tossing off his robe and yelling “Tase his ass, right now!” As McBain and the clerk were wrestling Larson on the ground, the judge continues to narrate the encounter, saying “That is enough, alright! Tase him. I’ll bust your fucking arm!

Larson has since been charged with aggravated stalking.