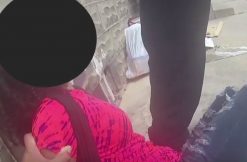 A 15-year-old says Maryland cops pepper-sprayed her after she got hit by a car. Now the Hagerstown Police Department face allegations they stepped over the line, but they claim everything was by the book.

Body-cam footage shows the Sunday incident. An unidentified driver accused the girl of hitting his car with her bike, bending a blind spot mirror. Several officers confronted the girl, who told them to not touch her.

They grabbed and arrested her after she got on her bike again.

“Get the f—k off of me,” she said as police started handcuffing her. They put her against a wall, telling her they wanted to get in touch with her parents since she’s a minor. She continued to tell the cops not to touch her anymore, and attempted to stand. At this point, police say, she kicked the officer’s body-cam. The footage continues from the point-of-view of another cop.

They put her in the back of a police car, but the officers said she wouldn’t put her feet in, so one pepper-sprayed her.

You can see the footage here. The girl appears on footage at the 3-minute mark, and the pepper spray incident at the 12 minute mark. Please note the video depicts graphic language and obviously, the use of pepper spray on a kid:

In a press conference on Thursday, the teen (unidentified because she’s a minor) said she got hit by a car, and refused medical attention. Nonetheless, the driver called 911 anyway. She said she suffered a panic-attack while cops confronted her. Among other allegations, she said an officer told her he’d punch her (this would have happened after the video embedded above):

Another cop that was there at the scene says, “Do you think it would hurt more if I was to punch you in your face and get a black eye, or get maced?”

I say, “Oh, really, you would really punch me in my face?”

And he shakes his head, and says, “Yes.”

The HPD said their officers did nothing illegal. From Chief Victor Brito at a press conference on Thursday.

In this case that we’re going to speak about today, the officers applied their training, and responded within the guidelines of the Hagerstown Police Department and policy, and used the appropriate level of force under the circumstances to gain control of a juvenile who was not being cooperative with us as you’ve probably seen in the body-cam videos.

The girl has been charged with disorderly conduct, 2 counts of second-degree assault, possession of marijuana, and failure to obey a traffic device.