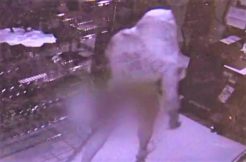 Slice of Towson owner Paul Rizas calls the man the “Naked Slice Burglar.” On November 10, the individual reportedly stripped naked, broke into Rizas’ pizza joint in Towson, Maryland, and caused thousands in property damage, according to CBS Baltimore. He allegedly only stole a little bit of change.

Yes, there’s surveillance footage. No, you don’t have to watch it. It’s not like there’s a law forcing you to do it. Watch Video:

The WJZ suggested that it was unclear if the suspect’s nudity was on purpose, or it he lost it while shimmying through a tiny vent.

“Free pizza for life to anyone who can identify this man to the authorities, enough to get him arrested,” said Rizas, who patently has a good enough sense of humor about this whole thing. In all seriousness, the restaurant might soon carry a new item in honor of the suspect. It’d be called “the naked pizza.”

Felony “Malicious destruction” is a possible charge for the reported action since damages are reportedly valued at $5,000. In Maryland, that means there’s a possible jail sentence of up to three years, and $2,500.

We’ve reached out to Towson police to learn more because clearly, this is the most pressing legal story of our age.