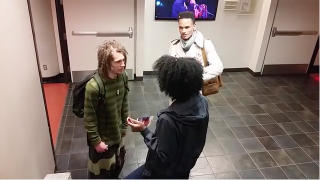 A video of a young woman at San Francisco State University (SFSU) confronting  a white student over “cultural appropriation” is now being investigated by the university.

The university said Tuesday it would look into the video, which has gone semi-viral with over 160,000 views on YouTube since being posted Monday.

“You’re saying I can’t have a hairstyle because it’s your culture? Why?” the student, who is white, says in the video. “Because it’s my culture,” says the San Francisco State student, who is black. “Do you know it was in Egyptian culture? Nah,” the man says. “Are you Egyptian?” the woman shoots back.

The two continue to verbally tussle until the woman appears to block the student from accessing a staircase and escaping the confrontation saying, “Do you know where Egypt is,” repeatedly, in different ways. The woman becomes more physically aggressive as things escalate. The young man, in a last ditch effort to diffuse and escape the situation, says, “Yo girl, stop touching me right now…I don’t need your disrespect,” which the woman then mocks in a deeper tone smirking as the student tries to get away.

The woman than catches wind of the fact that she is being filmed and says, “Why are you filming this?” directly at the camera. Her hand then cuts in front of the camera and the video comes to an abrupt end.

Check out the video for yourself below.

University police were called to the scene of the confrontation. “San Francisco State University promotes the rights of the campus community to engage in free speech, but does not condone behavior that impedes the safety or well-being of others,” SFSU officials said in a statement.