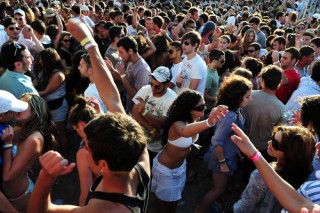 In what’s either a huge law enforcement operation or the premise for the next James Franco movie, cops in South Padre Island, Texas have been equipped with drones to monitor spring breakers. According to the New York Daily News, police at the vacation hot spot ordered the flying devices that use 4K cameras a while ago, and it’s just a coincidence that they showed up right before an estimated 25,000 college students are expected to descend on the beaches.

Police chief Randy Smith told Valley Central that he can use the drones for beach patrol. “We’re looking at deploying some that have a safety feature that releases a life jacket over a subject that is in distress.” They can also search for lost individuals. City public information officer Gary Ainsworth told the Daily News, “Any time you have an eye in the sky, it’s better than having just eyes on the ground.”

Last year, there were 166 violations reported during spring break, including disorderly conduct, public intoxication, and indecent exposure. according to the San Antonio Express-News.

It’s unclear how close the drones will get to the party-goers, but it seems like they’ll be too preoccupied to notice.