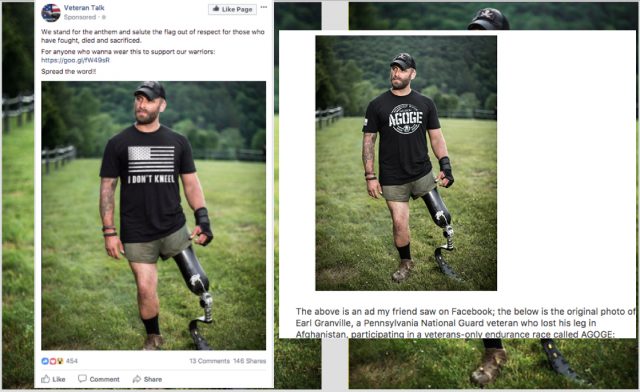 Earl Granville is a veteran of the war in Afghanistan, an athlete, and unbeknownst to him (until recently), the face of a popular conservative meme directed against Colin Kaepernick and protesting NFL players.

Granville’s story begins with the Spartan Race Agoge. The Agoge (pr: uh-go-gee) is a days-long endurance course that involves climbing mountains in the lush and rolling terrain of Vermont. Granville completed that race and got a black t-shirt with the Agoge logo to commemorate his mental and physical toughness.

Granville’s accomplishment is underscored by the fact that he lost his left leg in Afghanistan and now uses a metal prosthesis.

To mark his conquering of Vermont’s hills and mountains, Granville posed for a photo wearing the black Agoge t-shirt. That was three years ago. But recently Granville became aware of someone–in fact, multiple someones–exploiting his accomplishment and sacrifice.

Conservative media has been using a doctored image of Granville to sell t-shirts and hawk their brands. Instead of the Agoge logo, Granville’s shirt in the conservative meme version shows an American flag with the phrase, “I don’t kneel” underneath.

According to the Daily Beast, one website, “ineel,” created an entire store around that fabricated image, but took their site down after being found out. Ineel’s associated Facebook page, formerly known as “Veteran Talk” and now known as “Veteran’s Pride,” however, is still active. Granville reached out to Veteran’s Pride on Facebook. So they blocked him.

While remaining publicly agnostic on the political dimensions of the NFL protest–and the reactionary response to said protest–he doesn’t want to talk about his politics. Granville drew the line at exploiting his image to advocate for one side and make a few bucks. He said:

If somebody asked for my permission, I would’ve said no. But I didn’t hear anything from any of them. I understand it’s a hot item at the moment. But to see somebody profiting on this—to think, ‘Here’s an image of a guy missing his leg, maybe he looks military’—to use that as that agenda to sell a product? That’s where I needed to step in.

Multiple Etsy shops are still selling the t-shirt with the false image of Granville. And another Facebook page, “Political Insider,” recently published the fake photo. Granville contacted them as well, but only received an automated reply. Their post is still up with the caption, “Thank Him for His Service. Share.”

As for what Granville can do? Not much. The false image is viral and its presence has all but definitively eclipsed the original one. A reverse image search of the real picture mostly turns up images of the fake one created by conservative media.

For his part, Earl Granville would much rather talk about his athletic achievements and ongoing work counseling against suicide. Instead he’s talking about this abuse of his image–and currently filing cease-and-desist letters by way of a non-profit he works with.

But he doesn’t feel great about that either.

He said “I didn’t want to do anything about it, at first. And I feel petty doing that, but I don’t what else to do. I feel like I’m in high school with this.”