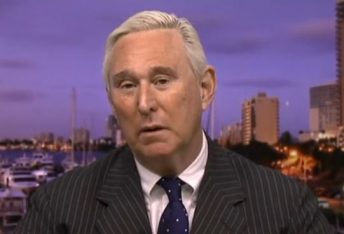 Roger Stone apparently really wants to see Hillary Clinton “frogged marched” out of her Chappaqua, NY residence and into the Metropolitan Correction Center in Manhattan to await criminal charges of some sort.  In fact, Stone is reportedly now formally petitioning the incoming Trump administration to empanel a grand jury to investigate possible criminal charges against the former Democratic presidential candidate.

Or, maybe the self-proclaimed master of the political dark arts was just coming up with a clever ad campaign for his new book about the 2016 presidential campaign due to hit bookstores and Amazon right after the election.

No way should @HillaryClinton avoid prosecution #LockHerUp Sign our petition to the @realDonaldTrump Administration https://t.co/5vZ9j7OUog

To describe Stone as merely controversial would probably be an understatement.  After all, he has been around since the Nixon years in Republican Party circles in various capacities.  He even briefly had an official position with the Trump campaign early on.  There is still some mystery about how his official role ended and the debate is still ongoing as to whether he ultimately played a larger role in an unofficial capacity during a nearly year-long run up to the Election Day.

Either we are a nation of laws or we a “banana republic” lead by criminals. After the Watergate scandal, the mainstream media told us repeatedly that “No person is above the law.” It is premature for the Trump administration to decide whether Bill, Hillary, and Chelsea Clinton should be prosecuted. In truth, the American people do not yet have a full cataloging of their many crimes.

We respectfully urge President-Elect Donald Trump and Attorney General Designate Jeff Sessions to gather all appropriate evidence and submit it to the Grand Jury to make the important decision about the Clinton’s potential indictment.

The website then goes on to list five items that serve as the basis for a Clinton indictment, all of which the website claims have been publicly reported.

The list ranges from obstruction of justice, spoliation of evidence — based on the wiped hard drive, violation of the Federal Records Act, violation of the Espionage Act and Clinton Foundation “ties to weapons deals.”

In the middle of this of five charges is a large picture of Stone’s new book, The Making of the President 2016 — a book Stone previously promised to write even if it meant facing off in court over a the infamous Trump nondisclosure agreements.

Bottom line:  it is hard to say whether the petition drive is a legitimate effort or a clever way to sell a new book.  Perhaps it is a bit of both.

As for Clinton, it is worth noting FBI Director James Comey has cleared her of wrongdoing related to the use of the email server earlier this summer and again, days before the election.

Furthermore, some of Trump’s most anti-Clinton surrogates on the campaign trail have somewhat backed off the idea of going after Hillary after the election, criminally.  Trump himself even suggested in a recent CBS 60 Minutes interview that he did not want to “hurt” Hillary.