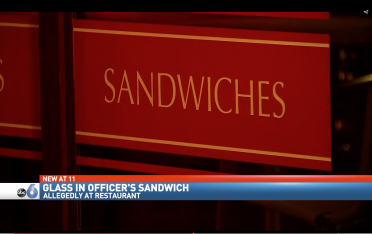 Authorities in Columbus, OH are investigating an incident at a local restaurant that reportedly led to a police officer being hospitalized overnight with injuries to his mouth.

WSYX ABC 6 News reports the officer bit into a sandwich he had ordered from a local restaurant and felt a “a grisly texture” in addition to hearing a “crunching sound.”  The officer then felt his mouth bleeding and when he opened the sandwich, investigators say he discovered shards of glass in the sandwich.

The officer went to the hospital and was held overnight.  Investigators told the news outlet that the officer is expected to make to a full recovery.