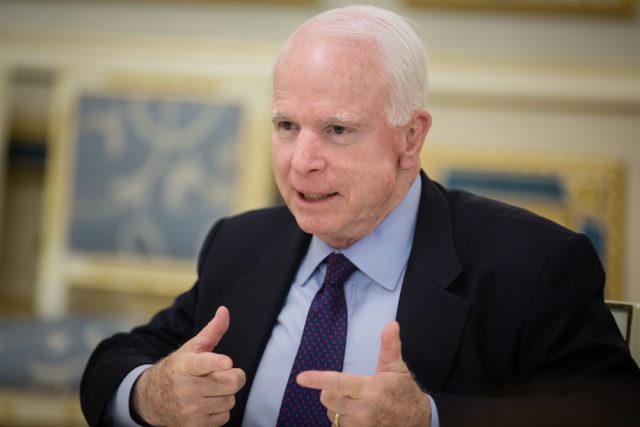 A San Diego State University professor sparked controversy with a recent Facebook post, in which he expressed his confusion and dismay over the support and well-wishes that the American people have been giving Senator John McCain ever since his brain cancer diagnosis. In a Facebook post on Friday, Jonathan Graubart said, “I find myself annoyed at the groundswell of good wishes for John McCain after his diagnosis of glioblastoma and have been thinking through why.” He then goes on to rip into the war hero and public servant for his political decisions.

“McCain is a war criminal and, more to the point. someone who as a politician has championed horrifying actions and been lousy on state commitment to public health,” said Graubart, an associate professor of political science. “I have no idea what he is like on the personal level and don’t care.”

He goes on to say that what really bothers him “is the urge to send such well wishes to an utter stranger,” claiming ignorance as to why anyone would feel a connection to a long-serving U.S. Senator in the public eye who previously ran for president (the professor has also complained about not being able to shut off Facebook’s birthday notifications, so he’s apparently not keen on wishes for people he knows, either). Graubart says that by wishing McCain to get well, it somehow “reinforces the notion that some lives are more important than others,” because there are other people who have suffered and died from the same malady.

The post drew a number of angry reactions and comments.

“It is inexcusable for you to come out and talk about someone who was just diagnosed with cancer because you have some issue with him,” one comment said. One Facebook user identifying as a student at SDSU called him out, saying, “Let’s be real. You are annoyed by the outpouring of support for John McCain in the wake of his cancer diagnosis because you don’t like him.”

A SDSU spokesperson said in a statement, “SDSU does not have a social media policy for faculty and staff. As a public institution, we do not and cannot regulate the private speech of students, faculty or staff. However, that should not imply the university’s endorsement of any particular viewpoint.”