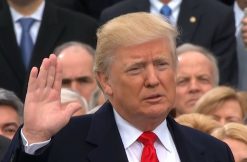 A principal in Spring, Texas is in trouble because of a Facebook post critical of Donald Trump‘s new administration. Specifically, that the President’s team is really, really white.

“I have to realize that expecting others to represent my disgust and views is exactly how the hell we elected this moron,” Diaka Carter, who is black, wrote on a Facebook post on Sunday, according to KHOU. She went on to criticize the new administration for its lack of racial diversity, describing “a sea of white faces at his inauguration void of color, a cabinet full of non-qualified white males.”

Seventeen out of 22 cabinet members in the new administration are white men. The last time a President had as many was when Ronald Reagan sat in the Oval Office.

Local woman Karen Lundberg, who is white, says Carter made a mistake, but that she should be held accountable for it.

“If I had put out this post and the word ‘white’ had been changed to ‘black,’ there would be no doubt in anyone’s mind that it was a racist remark,” said told the outlet, later saying, “Our educators and the people of influence that have voices to our students need to be uniting us, not dividing us further.”

Now the Spring Independent School District is reviewing Carter’s post to see if she violated their social media policy. The investigation’s goal is to balance her free speech rights while respecting the school district’s racial diversity.

A spokesperson told the outlet that they started investigating after some people in the community complained. Parents said off-camera that they disagreed with Carter’s post, but liked her as a principal. According to reporter Jason Miles, he learned that the principal set her Facebook account to private. LawNewz.com could not reach her for comment. We’ve reached out to the Spring ISD to learn about the possible disciplinary measures that she faces, but they declined to specify when sharing this statement:

Spring Independent School District is aware of concerns raised by several community members about a post on a personal Facebook page associated with a Spring ISD employee. As soon as we were alerted, we began reviewing the details of the posting and listening to concerns.

We are a school district that values diversity and believes everyone should be treated with dignity and respect. As such, as we review and respond to this incident, we will follow district policies to ensure that our employees’ right to freedom of speech are protected while also valuing and respecting the diversity of our schools and community.