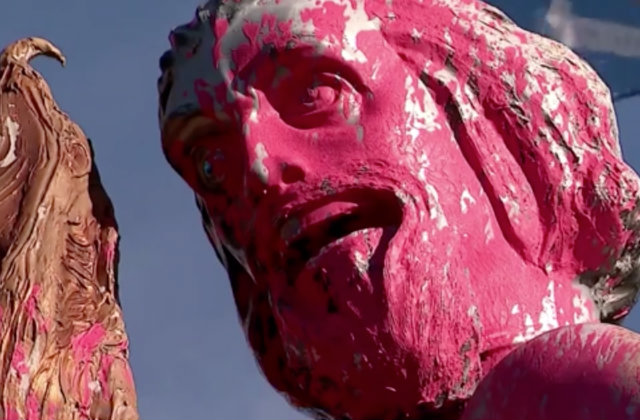 The owner of a vandalized statue claimed he liked how vandals painted it pink. Bill Dorris told The Tennessean in a Wednesday report that he won’t clean up his sculpture of Confederate General and early Ku Klux Klan member Nathan Bedford Forrest. He said the color would “show up real good,” and suggested it would turn red in the sun.

The statue, which sits on Dorris’s private property off I-65, was reportedly vandalized late Tuesday or early Wednesday. It has a pretty wild history. Sculptor Jack Kershaw was once an attorney for the assassin of Dr. Martin Luther King Jr. He pushed a claim that client James Earl Ray was a mostly innocent bystander in a conspiracy involving a mysterious man named “Raul.” This argument didn’t succeed, and Ray fired Kershaw over a disastrous interview in Playboy.

Dorris, a friend of Kershaw’s, dismissed claims the statue was racist.

“Somebody needs to say a good word for slavery,” he told The Times-Picayune of New Orleans, according to his New York Times obituary.

It remained a consistent source of controversy. Local authorities recently dismissed a request to plant vegetation to block the view.

“TDOT does not plant foliage on its right-of-way with the sole intention of blocking items on private property based on what might be offensive to some and not to others,” wrote Tennessee Department of Transportation commissioner John Schroer, according to the Tennessean.