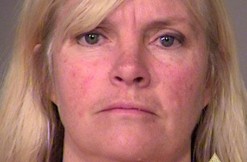 Shawna Cox, one of the armed folk who took over a federal building in Oregon, is suing the U.S. Government because she thinks it does the “works of the devil.” Regardless of whether she means it literally or figuratively, it’s clear she wants over $666 billion in damages. (If you don’t understand this reference to the “Number of the Beast,” then sit in a corner because we’re not explaining it to you.) You should know though, reading her suit can be a bit overwhelming, but here’s some choice bits.

“I am being maliciously prosecuted by State and Federal Bar Association members because they do not want to be held accountable for their subversive activities against the people of the United States of America,” she wrote in bolded, underlined text.

And it’s kind of true. She does face a felony charge of conspiracy to impede federals from discharging their official duties through the use of force, intimidation or threats. This comes after her January 26 arrest, with the feds are prosecuting her for her part in the January 2 takeover of the Malheur National Wildlife Refuge in Burns, Oregon, led by militia figurehead Ammon Bundy.

But she also implies—for some reason, we have no idea exactly why—that “the Federal Government refused to allow the states of the Northwest Territories to come in on the equal footing doctrine, of the original 13 states.”

Mind you, the Northwest Territories stopped existing in 1803, and don’t even have anything to do with Oregon. It covered modern-day states like Ohio and Illinois. Parts of what’s now Minnesota is as north and as west as that the territory got. Plus, why is she even assuming the newer states were treated more poorly than the older ones?

In any case, part of her claims were line with the other occupier’s stated goals: for example, getting the freedom of two ranchers convicted of burning federal property, and also a claim that the wildlife refuge employees were trying to expand their land onto privately owned land.

She also alleges the January 26 shooting death of militia spokesman Levoy Finicum was basically a hit, and that the feds also wanted to kill her and others arrested with her, including Bundy.

What else does she claim?

“At no time did I or anyone else interfere with any public employees working the Malheur in fact we encouraged them to come to work as we wanted to discuss the ownership problem with them and get as much information we could from them,” she wrote. “If anything, it was their choice to not come to work, out of guilt.”

That’s it. We’re done reading this. No more.

If convicted of the conspiracy charge, Cox faces up to six years in a federal prison.