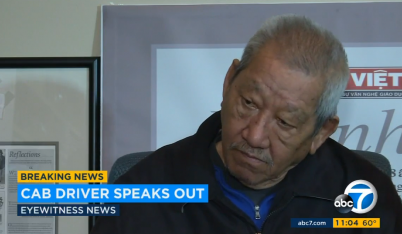 A taxi driver who was allegedly kidnapped and held hostage for an entire week by the three Orange County jail escapees is speaking out tonight, and his story is both terrifying and bizarre.

Long Hoang Ma, 74, is an independent taxi driver who advertises his services in a Vietnamese language newspaper in the Little Saigon section of Westminster, CA.  According to Ma, he received a phone call on the night of the escape to pick up what turned out to be the three escapees from a restaurant in Santa Ana.

After picking the men up, Ma said he was forced to drive approximately 3,000 miles over the course of several days, taking the men to various motels where the escapees would drink and watch tv reports about their brazen escape.  At one point, Ma said when asked to leave but Bac Duong put a gun to his stomach and told him they needed him to stay.

Then in a strange twist that might be the result of Stockholm Syndrome, Ma said he eventually bonded with Duong and he even credits him for saving his life when escapee Hossein Nayeri wanted to kill him.  Ma said Duong stood up for him and fought with Nayeri, arguing to keep Ma alive.

Finally, when you think this story could not get more bizarre, the group split up towards the end of their time on the run and Duong had Ma drive him back to Santa Ana and drop him off at the auto-repair shop where he turned himself in.

WATCH the entire interview via KABC: