No, The NFL Didn’t Give Trump a Lifetime Ban; The Real Story is Even Crazier 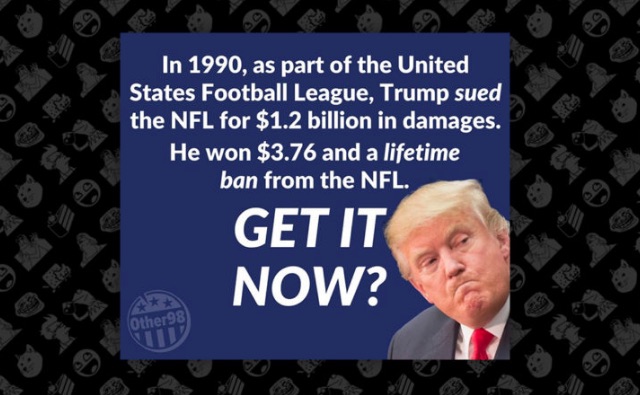 A viral meme claims President Donald Trump is banned for life from attending NFL games. That meme is incorrect.

Originally promoted by the liberal activist group The Other 98%, the meme’s text reads:

After losing over $200 million during its first three years in existence as a spring-summer league, the USFL decided to compete directly with the NFL and switched over to a fall-winter schedule. Before the fourth season ever even started, however, the USFL folded.

Enter: Donald Trump. Trump was the majority owner of the league’s New Jersey Generals–which he purchased right before the league’s second season. Trump was also one of the major voices in the league pushing for the ultimately unsuccessful decision to switch the playing schedule around.

Switch they did. And the losses began to mount. Trump spearheaded the idea–while others followed along–and it ultimately sank the league.

After the fold, the league and its owners collectively sued the NFL and their owners, accusing them of violating the Sherman Antitrust Act. The lawsuit was filed in 1984 and the appeal was decided in 1987–neither occurred in 1990 as the meme claims.

One press report credits Donald Trump as being the primary mover of the lawsuit–which is apparently the basis for the inaccurate meme.

The lawsuit accused the NFL of violating §1 and §2 of the Sherman Act–and some common law claims. The USFL’s major argument was that the NFL had monopolized professional football in the United States and through this monopolization and other acts, made it impossible for the USFL to get a major network contract with one of the three major networks at the time.

The jury dismissed the §1 claim–which was the heart of the lawsuit and the part dealing with the network television issue–but found in favor of the USFL on their §2 claim. Section two of the act reads:

Every person who shall monopolize, or attempt to monopolize, or combine or conspire with any other person or persons, to monopolize any part of the trade or commerce among the several States, or with foreign nations, shall be deemed guilty of a felony, and, on conviction thereof, shall be punished by fine not exceeding $100,000,000 if a corporation, or, if any other person, $1,000,000, or by imprisonment not exceeding 10 years, or by both said punishments, in the discretion of the court.

A later appellate decision explains why the plaintiffs–the USFL–won on their §2 claim. It reads:

The jury’s finding of illegal monopolization of a market of major-league professional football was based upon evidence of NFL attempts to co-opt USFL owners, an NFL Supplemental Draft of USFL players, an NFL roster increase, and NFL conduct directed at particular USFL franchises.

The §1 claim failed, however, because there was no evidence to support the idea that the NFL willfully acquired or maintained a monopoly in a relevant television market. A law review article notes, “[The jury] further found that the NFL’s contracts with all three television networks for the right to broadcast the league’s regular season and championship games through the 1986-87 season were not an unreasonable restraint of trade violative of Section 1.”

So, all in all, a win and a loss for the USFL. But the win was only a moral victory; the USFL was awarded $1 in damages. That amount was tripled because it was an anti-trust case. An additional 76 cents in interest was later tacked on to the verdict. By the time the legal wrangling had ceased–including an already-mentioned failed appeal–the USFL was dead and buried.

In most of the media stories written at the time, however, Donald Trump is only mentioned in passing—and sometimes not at all. So, it’s interesting to see his name catapulted to the forefront of the legal controversy here.

As for the claim that future-president Donald Trump received a lifetime ban from the NFL?

Well, for one, that’s not the kind of thing that can be delivered in a lawsuit.

Second, it was made entirely out of thin air. There is no lifetime ban on Trump.

One of the league’s former commissioners–long since dead–is alleged to have said that doesn’t want Trump to ever hold an NFL franchise, but that’s a personal beef, not the same thing as a lifetime ban, and certainly not the result of the lawsuit.

Thus, The Other 98%’s inaccurate meme effectively turns Trump’s animus toward kneeling NFL players into a clash of personalities and petty grievances based on evidence which does not exist.

LawNewz reached out to multiple members of The Other 98% for comment on this story and their meme’s lack of accuracy generally, but no response was forthcoming. This post will be updated if and when such a reply is received.

Editor’s note: This story has been updated to clarify the date of the original lawsuit and the appeal.