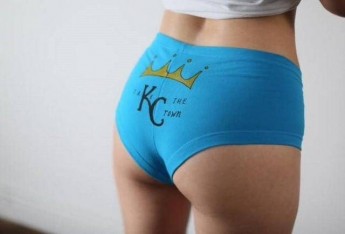 Back in 2014 when the Kansas City Royals were making a surprising run to the World Series, a federal undercover operation was conducted locally to crack down on counterfeit merchandise.  As part of “Operation Team Player,” federal agents from the Department of Homeland Security raided a small Kansas City lingerie shop called Birdies Panties.  The agents seized 55 pairs of underwear, claiming the interlocking “KC” logo on the back constituted copyright infringement.  News of the feds “panty raid” quickly spread nationally, along with outrage from all sides of the political spectrum.

Now, after waiting over a year and a half for a response, Vice Sports has obtained documents through a Freedom of Information Act (FOIA) request that “reveal [the] intimate details” behind the 2014 “panty raid.”

According to the report, emails suggest the driving force behind the raid that the Kansas City DHS Office was receiving pressure from above to boost its case numbers and an Assistant United States Attorney that was “eager” to prosecute cases.

“They (the Kansas City office) are trying to get their numbers up and will accept any leads for controlled delivery in Kansas or Missouri, even if they do not meet the criteria because the AUSA prosecutor is eager,” an unnamed federal agent wrote in an e-mail obtained by Vice Sports.  The same e-mail, sent five days before the raid at Birdies Panties, also mentions that the federal agencies were coordinating with Major League Baseball in conducting some of their operations.

The FOIA records reveal federal agents have given conflicting accounts as to what brought them Birdies Panties, but they have denied doing so at the direction of MLB.

The owner of Birdies Panties, Peregrine Honig, spoke about the raid with LawNewz.com on Friday and shared her thoughts about what the FOIA records revealed.

With the Royals finally winning again for the first time in 29 years, Honig says she thought it would be a fun idea to get in the spirit and make a small number of Royals themed items to sell in her 800-square foot boutique in Kansas City’s Crossroads Arts District.  She designed the underwear herself, hand drawing a “KC” underneath a crown along with the phrase “Take the Crown,” and had them printed locally by Lindquist Press.  When the first batch arrived from the printer about a week before the raid, Honig ran across the street to have a photographer friend snap a quick picture that she then put up on the store’s Facebook page — her only form of advertising.

Honig says the shop was full of customers on October 21, 2014 when armed federal agents raided her store and seized 55 pairs of panties.   The printer, Eric Lindquist, had just dropped off some new items, including some additional pairs of the KC underwear.

“The cotton was still warm from the press,” Honig said.

She took notice of two customers that seemed to stand out as they waited in line.  When they got to the counter, Honig remembers one asked for a pair of the KC panties in a size medium.  After she retrieved the item, the customer then flashed his badge and asked her to step outside.  Honig says it was very uncomfortable situation, having two armed federal agents walk her outside in front of her employees and customers.

The agents told Honig that the interlocking “KC” logo on the underwear was a protected copyright of the Kansas City Royals and Major League Baseball.  They informed her that they would need to confiscate all the underwear bearing the logo, which they ultimately did.  She was also asked to sign a document stating she would discontinue using the logo.

Honig says it was an incredibly unsettling experience, although she stressed the agents were as nice as they could be, given the circumstances.  As a store owner with employees that depend her, Honig says she felt an urgency to sign the form and surrender the clothing to just get it over with.  Once she signed the form, the agents then packed up all the logo panties and off they went.

Where they went next is not mentioned in other media reports, but Eric Lindquist tells LawNewz.com the same agents stopped by his printing shop two hours after the raid.  It was then Lindquist realized the two men that approached him as he was dropping off the underwear earlier that day were not really looking for a business opportunity, they were federal agents.

Lindquist said the door to his shop was open and the agents just walked in, uninvited.

“After they just walked in, I was told if I did not consent to a search they would seize all of the equipment in my store,” Lindquist told LawNewz.com in an interview on Friday.

Lindquist said agents searched the hard drive of his computer, presumably looking for the template he used to print the “KC” logo.  After the agents completed their search, he was also asked to sign a form saying he would not print the logo anymore.

Neither Honig or Lindquist were ultimately prosecuted for copyright infringement.  Shawn Neudauer, a DHS spokesman, told the Kansas City Star, “rather than prosecute, we chose to seize and destroy the items and let it go at that.”  He stressed, however, that the operation was justified because this was a blatant example of “counterfeiting a copyrighted logo of a hometown team.”

Honig says she understands the need for copyright laws, but she questions whether raiding her small store was the best use of government resources.  She was also troubled by the apparent coordination between a federal law enforcement agency and a major business like Major League Baseball.

“I am a female business owner in Midwest, who used an American made product and worked with other local businesses to support the local team,” Honig said.  “It was scary that my business could be threatened” by a larger business, seemingly working in conjunction with the feds. “It made Republicans, Democrats and even anarchists angry,” she added.

After it happened, Honig said she was encouraged and “amazed how everyone in the community came together to protect me.”  She also said the free national advertising campaign hasn’t been bad either.