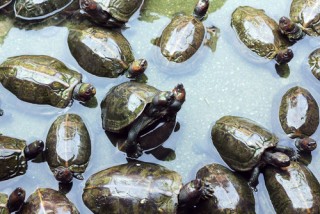 If it was just 50, would no one have noticed? Kai Xu, a Canadian man who was caught smuggling turtles on the Michigan-Ontario border, will have plenty of time to ponder that question in prison.

While Xu was caught with 51 turtles strapped to his legs, he actually smuggled thousands of the creatures to China from the U.S. and Canada. He was sentenced to 57 months on Tuesday, the Associated Press reported, but has already been there for the last 19 months since he was arrested. He expressed regret for his actions and thanked federal agents “for stopping the darkness of my greed and ignorance.”

The government claimed that Xu shipped the animals to China, or hired people to take them in their luggage on flights to China, where turtles are popular pets. Shipping turtles overseas without a federal permit is a crime.

Prior to his sentencing hearing, Xu wrote a letter to U.S. District Judge John Corbett O’Meara, explaining that he smuggled the turtles to help pay for college, and that he was only one semester away from a degree in engineering.

The prosecutor acknowledged that she believed that Xu was remorseful, but his was among the largest recent smuggling operations. Turtles that were intercepted at airports were valued at over $1 million.

“We don’t have a whole lot of cases exactly like this every day,” Judge O’Meara said.