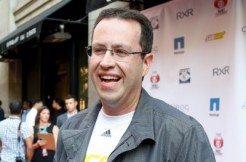 Investigators said they know of no allegations in which Miller personally abused a child.

Jared Fogle, 38, became famous as a spokesperson for the Subway sandwich chain, but that ended when the FBI raided his home in July, 2015. He’s currently serving a 15 year, 8 month prison sentence after pleading guilty to one count of distribution and receipt of child pornography, and one count of traveling to engage in illicit sexual conduct with a minor.