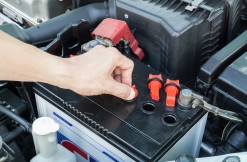 Now this is a story about sheer chutzpah. Florida man Gordon Raymond asked a sheriff’s deputy to jump start his truck, Off the Beat reports. Dumb plot twist: He’d reportedly stolen the vehicle.

See, a Martin County Sheriff’s deputy arrived at a business where a security alarm was going off. He saw a Chevy truck parked nearby, so he told dispatch to look up the tag. Raymond, 29, then walked up, and said that it was his truck. Its battery died. He needed a jump start. This is all according to Sheriff’s officials.

That’s about when dispatch replied with info on the tag: The truck had allegedly been stolen a few days earlier. Raymond reportedly waffled under questioning, first saying he got the vehicle from Craigslist, then admitting to the theft, the deputy says.

He then allegedly told the deputy his motive for taking the truck: his girlfriend left him at a bar without a ride home. According to the deputy, Raymond admitted to stealing the vehicle from a church parking.

“Mr. Raymond stated that at the time taking the truck seemed like his best option and that he had no other way to get home,” the deputy wrote. He also allegedly admitted to using it to go to work.