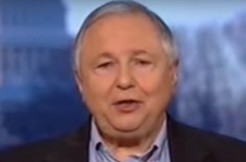 A law professor at George Washington University says an inclusive, all-gender restroom actually discriminates against men, and violates the D.C. Human Rights Act. Apparently, a facility right by a moot courtroom features three urinals, but people who use it can lock the door for privacy concerns.

Students came out to support all-gender restrooms at GWU back when one was converted from a men’s room.

“I fully support having a restroom that doesn’t require a gender identification to support the transgender community,” law student Steven Hasple told WJLA in February.

But the lock on the door has ticked off Professor John Banzhaf, especially since a nearby women’s restroom is multi-use, but there is no corresponding men’s room. He claims the D.C. Human Rights Act prohibits this kind of access to facilities.

“Because there are several urinals which permit more than one male to use this facility at the same time, it makes little sense for the first male user to lock out the others,” he wrote in all caps on a sign he posted on the restroom door.

Another sign on the door, posted by the administration, said users had to lock the door behind them.

“Thus, while any person who is so shy—in this day and age when coed restrooms and showers are common in many dorms, and even kids think nothing of texting nude pictures of themselves—that they cannot stand to share a restroom with somebody not of their own gender, is free to lock the door, it is neither required nor desirable,” Banzhaf wrote on his sign. “Let’s act like adults, not irrational prudes!”

The “potty parity” professor has been in the middle of restroom battles for years. He is actually a supporter of the “all-gender” restroom, just not the lock on the door. Banzhaf has long pushed for more women’s restrooms.

The all-gender facility “is intended to serve as a one person restroom despite the urinals contained therein,” law school spokesman Liz Field told The College Fix. She claimed none of the students have complained about it.