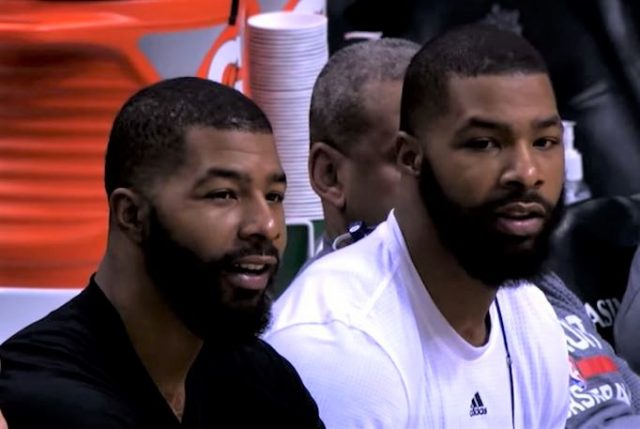 On Tuesday, a jury in Phoenix, Arizona reached a verdict in the assault trial of NBA players Marcus Morris and Markieff Morris, and co-defendant Gerald Bowman, finding all three men not guilty on all counts.

Prosecutors argued that the Morris twins and Bowman beat up 36-year-old Erik Hood outside a recreation center on January 24, 2015. All three men were tried together, but they were represented by separate attorneys to prevent conflicts of interest.  All three faced two counts each of aggravated assault.

The twins were friends with the alleged victim for years, but police say they had a falling out over text messages Hood sent to the twins’ mother. This feud culminated in the alleged attack. Hood told cops he was talking to a friend of the Morris brothers when he was attacked from behind. The twins and three other men punched and kicked him as he tried to escape, Hood said. Witnesses claim the alleged assailants escaped in a Rolls Royce, while Hood said he sustained a broken nose and bruises to the head. A friend, Sharika Sherrod, took Hood to the hospital.

The defense blamed the attack on Julius Kane and Christopher Melendez, two other men who pleaded guilty shortly before this trial. Neither testified against the Morris Brothers or Bowman.

The defense claimed Hood, the victim, pinned the attack on the Morris Brothers because they are rich. Hood himself testified he was expecting at least $7 million from the NBA players in a subsequent civil judgment, though he said he really wanted millions more. Hood further testified he didn’t expect to get anything from the other alleged co-conspirators, one of whom he referred to from the witness stand as a “peon.”

Sharika Sherrod, a friend of Erik Hood, testified that she both witnessed the attack and took Hood to the hospital. The defense pointed to text messages which showed that she, too, was expecting money from any Morris Brothers settlement in return for testimony. Sherrod said she was merely joking to a friend in those messages.

The trial was marred by accusations of witness tampering. Defense attorneys argued a mentor named Alonzo Hickerson asked two witnesses to lie. Those witnesses were unwilling to completely implicate the Morris Brothers, even though they testified Hickerson suggested they do so. They said Hickerson suggested they’d get a kickback payment, presumably from any civil settlement received by Hood, though prosecutors argued that there is no evidence Hood communicated any such plan to Hickerson. Hickerson did not testify at this trial.

Bowman, a former NFL prospect, said on the stand that he wasn’t even at the rec center that day. A barber testified to giving him a haircut that evening. A friend backed up that story and said he also went to a nightclub after that. Other witnesses claimed Markieff Morris wasn’t even involved in the beating, but rather was a witness to it. (Prosecutors argued there was evidence he was guilty either way under the theory of accomplice liability.)

“Erik Hood did not bring this upon himself,” he said, and told jurors not to focus on Hood’s pending civil lawsuit against the brothers over the attack. Instead, focus on the evidence.

Defense lawyer Timothy Eckstein, who represents Marcus, said the alleged victim lied by implicating the twins. Witnesses said the brothers were not part of the attack, although they were at the scene. Eckstein said that Hood gave inconsistent statements about the assault, and pointed out that two witnesses claimed that the alleged victims’ mentor Alonzo Hickerson asked them to implicate the twins in return for possible money.

Marcus Morris joined the Boston Celtics during the off season.  Markieff Morris is a forward for the Washington Wizards.

Aaron Keller contributed to this report.