Judge Tells New Citizens They Should Leave U.S. If They Don’t Like Trump 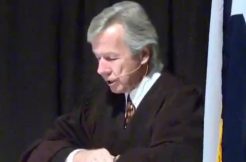 Federal Judge John Primomo had some words for new Americans on Thursday.

“I can assure you that whether you voted for him or you did not vote for him, if you are a citizen of the United States, he is your president,” Primomo said at a U.S. Citizenship ceremony in San Antonio, Texas. “He will be your president and if you do not like that, you need to go to another country.”

He told KEN5 that he actually meant just to unify people with respect toward the office of the president, not to come off as political. He said he didn’t even vote for President-elect Donald Trump.

In any case, Primomo also criticized NFL Players like Colin Kaepernick, who protest police brutality by kneeling during the national anthem.

“I detest that because you can protest things that happen in this country,” he said, clarifying that he was making a personal opinion, not a legal analysis. “You have every right to. You don’t do that by offending national symbols like the national anthem and the flag of the United States.”

As a constitutional matter, politically charged protests, including flag burning, are protected under the First Amendment. It’s also legal to criticize the president.